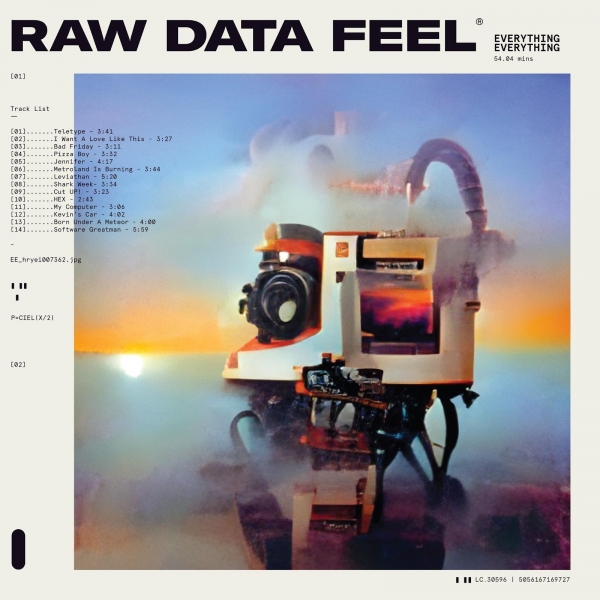 Everything Everything only ever continue to excel.

For over a decade, the quartet have been behind some of the most viscerally exciting hybrid genre releases of recent memory, and you need only glance briefly at their work to recognise it. Man Alive. Arc. Get to Heaven. A Fever Dream. Re-Animator. Each album is stylistically and thematically distinct, whilst also demonstrating a vibrancy and eccentricity that few are able match. In short, Everything Everything do not miss.

It's an enviable reputation but one which comes with the challenge of mounting expectations – expectations that the band’s latest, Raw Data Feel, intends to surpass. It’s fortunate then that their sixth is one of the band’s best albums to date, one which is rigorously defined by its startling heart and character, and one which sees the Mancunian four-piece defeat expectation yet again.

At its core, Raw Data Feel is a product of Everything Everything’s relentless urge to experiment. It’s an album saturated by the intention to rework and redefine, and this is what’s allowed the band to reach ever more compellingly for the exosphere. Following the impact of the pandemic on their previous effort, Re-Animator, Jonathan Higgs and co sought to shift gears, to find new ways of working and it’s an approach that has paid dividends here. Raw Data Feel is Everything Everything at their most spontaneous and resolutely playful and it’s appreciable from the outset.

Perhaps the most eminent example of this is in Higgs’ decision to deploy an AI to assist on lyrical duties. This integration works so seamlessly with Everything Everything’s established style that it's difficult to believe that this hadn’t always been the case. Higgs’s lyricism has always been kaleidoscopic and unpredictable in nature but bolstered by AI, new, synthetic opportunities present themselves. What’s so impressive then is that in spite of these choices, Raw Data Feel is still a relentlessly human effort, a record which pits the organic against the artificial and finds the latter come up wanting.

It's this quality that instantly distinguishes Raw Data Feel from the band’s previous efforts and the one that makes the material found within so instantly listenable. On this subject, I was initially disheartened to see that the four outstanding singles, "Teletype", "I Want A Love Like This", "Bad Friday" and "Pizza Boy" made up the album’s first tracks. I was disheartened as each of these songs represent moments at which Everything Everything are at their most deliberate, nuanced and urgently anthemic. How then, could the rest of the album keep pace?

The answer almost immediately comes with "Jennifer", an unmitigatedly hopeful track which is almost quixotic in the challenge that it issues to difficult times. It’s also a prime example of Everything Everything’s continued experimentation with genre, seeing it borrow liberally from sources like Paisley Underground and the brightest archetypes of pop.

"Shark Week" is another stalwart stylistic mashup which begins with a bullish hip-hop volley interspersed with clarion call orchestral horns and Higgs’ well-worn falsetto delivery. "Kevin’s Car" is another highlight which feels like it could slide comfortably into your romcom of choice sitting as it does on the right side of saccharine. Truly, each track on Raw Data Feel has something new to offer and even more to love. In this way, it may just be the best album Everything Everything have produced to date.

It’s generally acknowledged that Everything Everything’s third effort, Get to Heaven, is the band’s sturdiest release to date and justifiably so, but with the release of Raw Data Feel it feels like that could soon change for many. Through a dizzying blend of experimentation, innovation and stylistic idiosyncrasy Everything Everything have created another peerless record with Raw Data Feel, one which proves once more that the horizons the band chases are theirs and theirs alone.