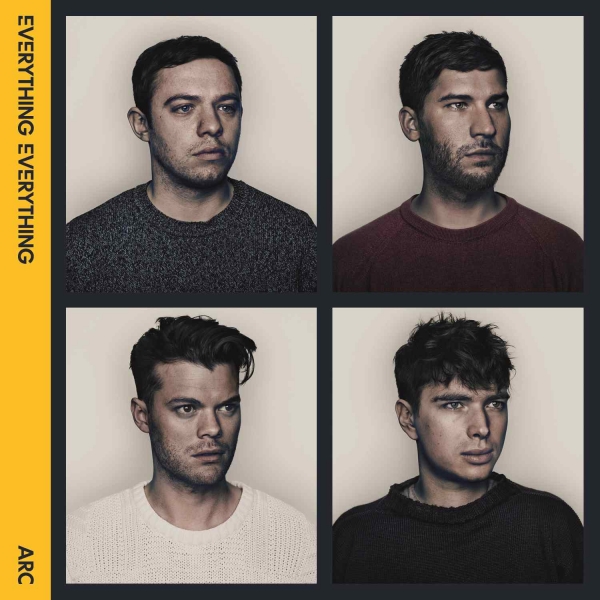 Everything Everything, the Mancunian four-piece with a bandolier of undecipherable lyrics, jittery caffeine-hyped axe licks and relentless falsetto made waves back in 2010 with their phenomenal, intelligent math-indie debut, Man Alive.

Breaking the album charts and scoring a Mercury nomination is always pretty big news – not least when your record is one of the hardest to follow LPs of recent years. It was a glorious, angular mess of ADD cheekiness, insatiable melodies and nonsensical (to anyone but prime songsmith Jonathan Higgs) lines about Faraday cages and patriarchal statues. Difficult to grasp, but easy to adore. So how would they follow up something so directionless, so critically lauded and so goddamn brilliant?

With something better, of course.

Second effort Arc is darker, bleaker. It’s a focused beast of hyperventilating frustration, full of contemporary critique and the strained emotion of unrequited love. Or possibly not, he might actually just be singing about dolphins and volcanoes – we may never know, due to the friggin’ absurdity and gargantuan lexicon. Nevertheless, it seems poignant.

Top 40 stormer ‘Cough Cough‘ opens with an anxious introduction of splutterings and hedges. The punchy percussion and flippant wailings are pierced by one of the catchiest basslines this side of ‘Hysteria‘. The cut is essentially a flock of seagulls, weaving and darting in various directions, squawking at random and nervously edging closer and closer to the side of your head. It’s anthemic, paranoid. Similarly, ‘Kemosabe’ is an instant classic. It’s more accessible than most of Man Alive, but it still retains that knowing wink of cleverdickishness – which is basically Higgs wringing his hands and cackling “None of you will ever understand what I’m on about!” like some kind of small-time Bond villain. Regardless, it’s supremely infectious with perfect melodies and a perfect chorus. It soars head and shoulders above the art-rock of Django Django or the folk-step of alt-J in terms of blending well-informed technique with damn fine pop music.

‘Torso Of The Week’ breeds the frailty of former ballads like ‘Come Alive, Diana’ with a chugging rawk we couldn’t have forseen from the boiler-suited boffins. It’s a charming backhand to the image-obsessed Daily Mailers et al. and features a truly giggle-worthy intro replete with lines like: “Jogging all over my grave baby with your big bad feet”.

Contrasting the oomph of the first three tracks, chamber-quartet styled ‘Duet’ highlights a delicate side to the Everything boys – a pensive depth and seriousness that reminds us that they’re not just a troupe of hook-crobats, churning out catchy earworms; they do have something to say behind all the complications and bombastic riffs. Eastern-influenced ‘Radiant’ performs the same function – despite all the pomp, there’s a brooding bout of smarts underneath. There’s a myriad of tracks which are legato slivers of ponderous balladry – triumphant ‘The Peaks’, twitchy wonderland-pop closer ‘Don’t Try’ and the naked beauty of ‘The House Is Dust’. ’90s R&B-esque ‘Armourland’ is hella smooth, with chorus/vocoder-laden vocals and the elegantly chopped ‘n’ changed samples that have featured so heavily on Arc. There’s a hint of trancey soft pads and ticking synths here, but nothing than overpowers the genre-bending style into one pigeonhole or another.

Man Alive, in hindsight, was an immature album. Great, but the endless flurries of ideas and twerky ratatats of affected guitar were divisive. This follow-up is a lunge towards the adult. Where their debut was flighty and needed reining in, Arc revels in concision. They’ve thought long and hard about what this record is about, and as a result it’s a solid, rounded collection of stunning single-worthy songs. There’s not a weak moment.

This is a thundering response to sceptics of their scattered, canny style and those warning of the pitfalls to avoid in second LPs. They’ve exceeded expectations, delivering an incredible start to 2013 and ensuring a legacy for themselves – it will be near impossible to forget the band after a record like this. Everything Everything have their cake and they’re eating it too – Arc proves that they can keep their zany shade of indie and still be taken very seriously.