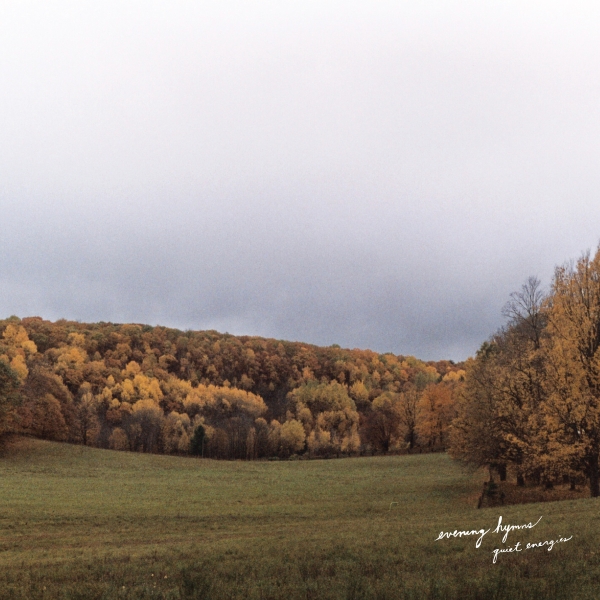 2012’s Spectral Dusk showed Evening Hymns’ Jonas Bonnetta examining – honestly and revealingly – the death of his father. Layers of ambient sound recorded in a log cabin with friends created a spiritual no man’s land between the living and the dead, with sound forming the bridge that gave hope to singer and listener alike.

In a brilliant solo concert at London's Hoxton Hall two years ago, Bonnetta played all the songs from that album with a plangent beauty that seemed itself a statement of moving on. That period, singing night after night of his father’s death, in turn provided its own influence on his new record, Quiet Energies. Indeed, he addresses it directly on the  seemingly upbeat “Oh Man You’ll Walk Again and Again" ("Drove for a year sang my songs into beers / And to be honest it never felt good"). Returning to his rural Ontario home, this album marks a moving on for Bonnetta.

Quiet Energies comes after a long period of touring and reveals a more upbeat, Tom Petty-like side to Bonetta's work. Recorded in his house in Mountain Grove, Ontario, with James Bunton recording and mixing, Sylvie Smith and musicians from The Wooden Sky providing a rich musical underpinning, with Mika Posen (Timber Timbre) on strings as before. The music has its faster side, but nonetheless maintains the atmospheric, reflective, acoustic quality of his earlier work, giving further depth to the already rich lyrical landscape of the songs. Together they have created music grounded in a natural wilderness with a sense of a human being struggling to make sense of himself.

Album opener “If I Were A Portal” is arresting and fast paced, the sound dominated by synth and chorus driven guitar and a sense of joy, but a far from simple song. The lyrics talk of absorbing energies and memories  and converting them to something positive “I will take what I am given / and return it back slow”. A song full of ghosts acutely felt, as is the next, “Evil Forces”, about moving away from the social, urban world, with a brooding bass and soaring synth line. “House of Mirrors” continues the playing with a troubled memory of a relationship that is looked at at from every angle to jangling guitar riffs, finally ending with a heartfelt sense of release.

“Rescue Teams”, “Oh Man You’ll Walk Again and Again” and “Connect the Lines” are three songs that form the emotional and musical core of the album. “Rescue Teams” slows the pace down with an echoing layered soundscape that wrestles with the notion of memory as a way of keeping someone alive. This thought continues in “Oh Man You’ll Walk Again and Again”, which manages to be upbeat and brooding as he thinks about things he’s done to deal with memory – concluding that whatever he does his father will be there – the song ending with gentle feedback that adds an other-worldly dimension. “Connect the Lines” has a moderate running-heartbeat like rhythm which reflects on just making sense of things ("I take each day with a bullet / I live my life out on the line…/ Oh I wanna know / Will I connect the lines"). The song ends with a field recording of a boat on the Yukon at Dawson City, a place of pilgrimage for Bonnetta in the ultimate northern wilderness.

This segues straight into a driving “All My Life I have Been Running”, with Bonetta undertaking more examination of the past that he accepts will always be there, ending with a Dylan like spiritual crisis ("I heard a voice calling / Just whispering behind the pines / It’s hard to leave your conscience boy / It’ll be with you all the time…"). Finally, the pace slows with quiet keyboard and barely shimmering strings into “Light as a Feather”. Strummed gently on a guitar the song seems to reconcile all the troubling  memories of the album ("Found some solace / Found some starlight / found the calm in my soul"). The strings gradually come in and the album ends on a note of personal hope and optimism, like it began.

This is a great, poetic, musically ambient postcard from the wilderness that deserves to get Bonnetta’s unique voice widely noticed.