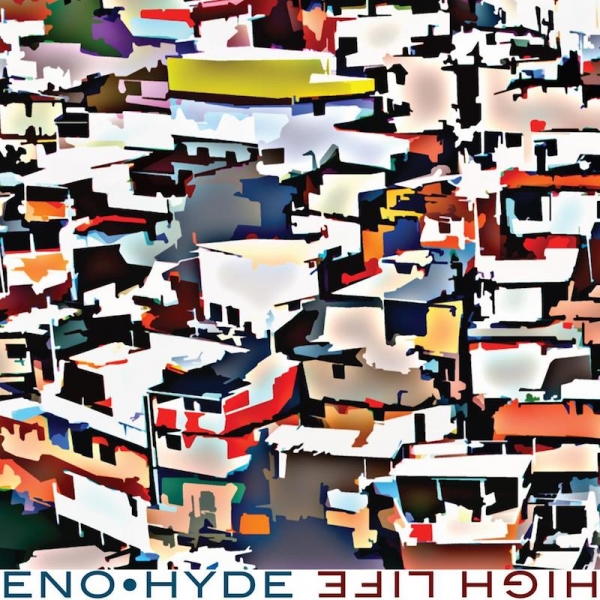 Just weeks after the release of their first collaborative album, Eno (Brian) Hyde (Karl) have a second collection recorded, produced and ready for release. High Life follows Someday World, an electronic rock record that wasn’t particularly comparable to either artist’s previous output. While Eno is perhaps best known now for his production credits (with Coldplay and U2 sitting proudly at the top of the list), his solo albums have produced an unapologetically ambient sound, while Karl Hyde’s work as a member of Underworld has provided the world with some of the most iconic house anthems.

If anything, it’s Eno’s influence which has the edge here, with a collection of often instrumental tracks which could quite easily have provided the fourth instalment of his 70s/80s Music For Films releases, made up of ambient instrumentals for imaginary films. (As was perhaps the plan all along, some of the pieces would eventually go on to feature in films, a turn of events which wouldn’t shock if they were to repeat themselves with these numbers). It’s an inevitable outcome considering the pioneer’s association with the genre, with The Ambient Music Guide praising how he has affected “the idea of modern music as a subtle atmosphere” which can be heard on High Life even more so than on Someday World.

Whether outtakes from their debut release together or a genuine continuation, High Life provides a more in-depth yet raw take on the possible Eno Hyde outputs. Playful, repetitive guitar parts play throughout opener “Return”, a song in the style of Coldplay’s Eno produced Viva La Vida! Or Death And All His Friends, which could easily soundtrack landscapes and skylines in a Danny Boyle picture, while the guitar in “DBF” is equally as looped but a little more wired. It’s only during the last quarter of the song that grinding and distortion give a more obvious impression of Karl’s input. Once again, a Boyle flick could benefit from the atmospheric track, perhaps swapping the horizon for the industrial inner streets based on a more developed, compact sound.

“Moulded Life” is the most direct example of Underworld creeping up on the project, distorting and shaping its sound. Explosions and spirals of electronic effects are scattered over orchestral manoeuvres that climb like stairs on this dark collage of grit, strings and wires. It’s tricky to follow but difficult to ignore, and a far cry from the more ambient moments found elsewhere. In fact, if it was to soundtrack a film this one might just be one from the Underworld series.

“Lilac”, like many of the songs, is a long, slow burner at 9’25”. Continuing with the Viva La Vida-like guitar work, the fact that Will Champion worked with the duo on their debut should come as no surprise.

Female vocals add a different dimension to “Time To Waste It”, which bomps along on a reggae groove as the voice is echoed and broken over the track, with chants making a more prominent role during “Cells & Bells” - easily the most sparse moment of the album. High Life acts as more of an alternative to its predecessor than a sequel, which comprised nine tracks of “standard” length, some not unlike album tracks by Depeche Mode (an act who, despite having tracks remixed by Eno, have surprisingly not had the full album treatment). With that in mind, it’s not quite as appealing generally speaking, but does feature music for those moments when a soundtrack to a subtle atmosphere is needed - whether on screen or in imaginations - with hints of more life slipping in between.