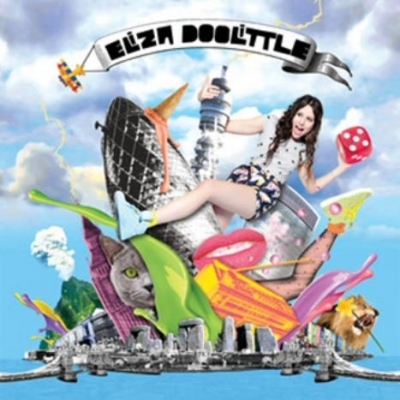 Currently trailing only to Eminem in the UK iTunes chart, Eliza Doolittle’s self-titled, breezy made-for-summer pop debut has clearly put a spring in the nations footsteps whilst nicely filling the gap left by Lily Allen’s ‘departure’ from the music biz. Not that I wish to get bogged down in seemingly lazy comparisons to Lily Allen, (or Remi Nicole for that matter), before I even get started with the music, but Allen’s name seems to be an unavoidable sigh that understandably escapes everyone’s lips upon first listen. And with a collection of cutesy mockney singsong ditties that recall childhood exploits and young love, the press can hardly be blamed for such glaringly obvious comments.

Lets face it, as long as there have been musical innovators there have been those they inspire, who either stick to their predecessors musical formula or add something extra to the equation. The latter group can be found scattered amongst the musical greats of our time, whilst the former burn brightly for a brief moment before fading into the ether. Eliza Doolittle for the most part falls into the former: her oeuvre, especially tracks ‘Nobody’ and ‘Go Home’ seeming little more than mimicry.

However, not wishing to be unfair to this young Londoner I feel I should point out that the album’s rare reggae inspired moments do offer up some redemption. Album opener ‘Moneybox’ is a catchy ska number that sees Eliza’s crisp vocals accompany staccato acoustic guitar strums, whilst ‘Rollerblades’ jaunty piano keys and toy drum make a great album highlight. The mid-60’s doo-wop American pop of Skinny Genes has a great gently rolling barbershop quartet harmony that is inescapably reminiscent of Brenda Lee’s blues inspired rockabilly.

With its deep saxophone bass line, soaring violins and chorus taken straight from the incredibly powerful 1930s WWI marching song ‘Pack Up Your Troubles In Your Old Kit Bag’, recent single ‘Pack Up’ is a brave and interesting choice for young Eliza. Nothing, however, could ever make me overlook the cringe worthy fact that she begins to tweet mid-song.

Some would argue that this transitory creation doesn’t have to be weighed down with the pretension of enduring significance, others that if perhaps given time to mature, reflect and grow as an artist young Doolittle could develop that vital original equation hinted at in the low-key number ‘A Smokey Room’. But as the victim of an over hyped release and a labels last-ditch attempt to jump on a niche bandwagon, this album is little more than a soundtrack to bright summer days that is as likely to disappear from the nations playlist as picnic-ers are from the parks when the sun disappears behind the autumn clouds.