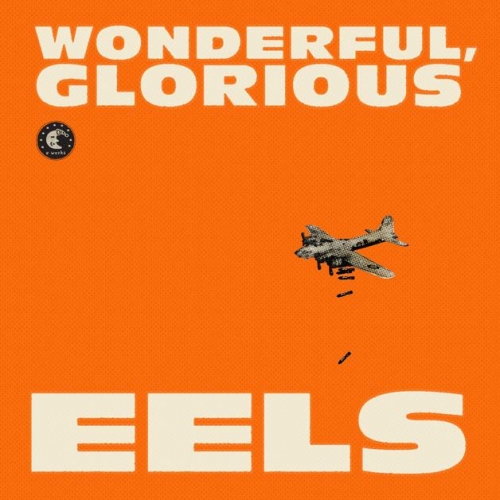 For musicianship alone it’s probably one of his best albums for years: blues and country-rock done as only Mark Oliver Everett aka E of Eels knows how, sharing the latest spoils of his songwriting with a versatile new band in ‘Los Feliz’ his Californian recording studio. But it’s the philosophical ramblings that edge it for me: glorious ballads of the heart ‘Accident Prone’ and ‘The Turnaround’ alongside more uptempo and optimistic pieces like the current single ‘Peach Blossom’ and the undisguised joy of the title track. The band handle everything he throws at them with aplomb, and it’s all served up with E’s wonderfully grizzled vocals sounding like some kind of Johnny Cash for the modern-day. Just a few of the things that make Wonderful, Glorious more than just another Eels album.

Everett turned 40 a while ago, but calling this a mid-life crisis album would be just plain silly: crisis, what crisis? His latest is more of a crossroads, negotiating one of the busiest periods of his life, after three releases in quick succession around 2009, followed by extensive touring, playing to audiences around the world with his new band. And it all came off the back of his autobiography Things The Grandchildren Should Know published in 2008, detailing his rather complicated family life, along with the TV documentary Parallel Worlds, Parallel Lives which he made about his father, the quantum physicist Hugh Everett III. The artist himself said he felt “boxed-in” afterwards, and needed to work his way out creatively. The career has always gone in sporadic fits and starts, at times songs apparently coming out of his ears, followed by drier “cooling off” periods. Last year, when Everett’s feet had finally touched the ground after the latest creative burst, he bought himself a recording studio and set to work on his latest album.

He’s telling things in the first person on Wonderful, Glorious, so it may or may not be autobiographical, but E’s never shied away from using music as a vehicle to work through personal issues, has he? Electro-Shock Blues in 1998 famously chronicled tragic family losses, while the follow-up Daisies Of The Galaxy released 2 years later described some of his hopes as he started to re-build his life. Everett tends to put it all out there in his songs, like a therapy session, but is blessed with the personal charm to carry us with him. He’s got that knack of writing personal soundtracks which give lie to the idea that music is inconsequential or doesn’t matter.

The only major difference this time is that he’s sharing the songwriting duties in a 5-way collaboration with his band. The narrative is still very personal: a guy taking stock of his life in order to understand and accept his situation so he can move on. He begins all fed up and mentally tied in knots “as quiet as church mouse tiptoeing everywhere” and in this fit of anger resolves to change (‘Bombs Away’). With a lot of musical bonhomie, odd kitchen sink sounds and fuzzy distorted guitar and twang, it sounds a lot like Tom Waits and his guitarist Marc Ribot. ‘Peach Blossom’, on other hand, is when he starts noticing some of the nice things around: “Open the window and smell the peach blossom, the tiger lily, the marigold … you gotta love what’s happening here, there ain’t nothing to fear” . Watch the Blues Brothers-style video and listen to a song which resonates with JJ Burnel’s classic bass sound on The Stranglers’ similarly named classic.

The album generally moves upstate as the mood of the main character lifts. ‘On The Ropes’ is the classic fighter song with all the metaphors of boxing, being on the ropes etc.. Musically it’s very simple and stripped down, with just guitar, piano and snare, Springsteen-esque, like ‘I’m On Fire’ from the 1985 classic Born In The USA. ‘New Alphabet’ starts off all dirty blues, the orchestrated strings then take it up a notch into a Neil Young-type anthem. Bizarrely, ‘Stick Together’ has that unmistakable J. Geils Band organ riff for ‘Centerfold‘ before E launches into a friends’ tribute.

There’s plenty of great music on show then, but Everett is still best when he’s tugging the heartstrings or being all curmudgeonly. Try and stem a tear when you hear ‘Accident Prone’ for the first time: I wasn’t able to. And then you realise the whole song turns on a mood (“a happy accident, me running into you/Who do I have to thank, to what do I owe?”) and reminds us that occasionally you only need a voice and a guitar to move a mountain. Other highlights include ‘The Turnaround’, strangely sounding like Supertramp’s epic ‘School’ from 1974′s Crime Of The Century. ‘True Original’ is more like earlier Eels miserabilist classics ‘Dead Of Winter’ and ‘Ant Farm’ from Electro-Shock Blues.

E gathers himself at the end for one final push with the title track. Even in the darkest moments, he tends to leave things on an optimistic note, but at the end of Wonderful, Glorious he’s unashamedly euphoric:

“My love is beautiful and it’s here for the taking/It’s strong and pure/And utterly earth-shaking/My love has brought me here to show you it’s true/A wretch like me can make it through.”

Musically, it’s yet another highpoint for the album, akin to the Stones’ version of the Bob & Earl classic ‘Harlem Shuffle’ with an explosive vocal at the end to make it a fitting climax to a very solid 10th studio album. On Wonderful, Glorious, Mark Everett not only has the songs but also a band capable of delivering the sort of breadth and depth of response he needs to keep the Eels vehicle moving onwards and upwards.