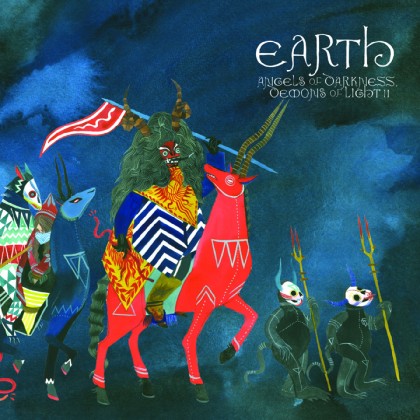 For a man who has spent many years battling addictions, is it any wonder that Dylan Carlson wants to keep himself busy and away from his demons? Following on from last year’s excellent Angels of Darkness, Demons of Light I, Earth return with a second album in twelve months, the companion piece Angels of Darkness, Demons of Light II. Recorded at the same time as 2011’s record by Stuart Hallerman, the man responsible for engineering the brutal drone of Earth 2, it’s every bit as good as part one, and is one mighty middle finger up to those who don’t believe that Carlson and his band are “metal” enough any more: he really doesn’t care.

Carlson has overseen Earth’s development from drone pioneers who pretty much reinvented heavy metal with slower riffs (and invented Sunn O))) in the process), to a kind of super slo-mo dusty Americana: all blues, jazz and elongated country twang. It all began with Hex; Or Printing in the Infernal Method, then continued the progression with the “gospel” record The Bees Made Honey in the Lion’s Skull that thrived on the organ and brass of Steve Moore, before the first part of Angels replaced Moore’s blues with the cello of veteran collaborator Lori Goldston. With Adrienne Davis as always adding sensitive percussion and Karl Blau back on bass for the second time, Angels II shows that Earth are more of a band than ever before. Sure, Carlson’s languid guitar playing still dominates, but the integration with the cello, and the rhythm section, is better than it’s ever been.

Opener ‘Sigil of Brass’ (a sigil is a magical seal, and the mystical theme dominates throughout, revealing Carlson’s interest in the otherworldly, something he’s trying to focus in an epic solo project) might be the brightest and most accessible moment in the Earth canon so far; and while this gentle introduction is extremely pleasant, the real joys can be found in the slowly unwinding epics that follow. Hex’s desert-noir has had a folk element added to it through Goldston’s cello, (whose influence on Nirvana Unplugged should not be underestimated); while Carlson seems to have developed a lighter touch in his playing, turning a track like ‘His Teeth Did Brightly Shine’ into something akin to the slowcore of the early ’90s. There is, however, still more of a weight behind what Earth does than was found in that genre, with Carlson still bringing the darkness as the track chugs along, sparked by some improv soloing.

The moment that best captures what Goldston has added comes with ‘Multiplicity of Doors’, a stately waltz that combines doomy cello with scratchy guitars, intimately recorded to give it a live feel and never outstaying its welcome in its 12 minutes. ‘The Corascene Dog’ has a jazzy swing to it, with Adrienne Davis’ subtle and instinctive drumming providing ballast that ensures the duet between guitar and cello doesn’t end up meandering. Final track ‘The Rakehell’ is simply a virtuoso performance from Dylan Carlson, his bluesy grooves building and falling, each note being hypnotically teased out for as long as possible before the track finally dumps us in the middle of the desert, abandoned and broken.

Angels of Darkness, Demons of Light II is an excellent record from beginning to end; engaging and intimate, yet widescreen and full of ambition in terms of its themes, sound and construction. Some of it was recorded live in the studio as jams developed into songs, and this gives the album a natural and welcoming feel. Earth, by moving further away from their drone and noise beginnings, have become an even more interesting and exciting prospect over 20 years since the project first began – they’re by far the best act on Southern Lord. It seems that Carlson is intent on remaining prolific, and I for one can’t wait for what’s next.