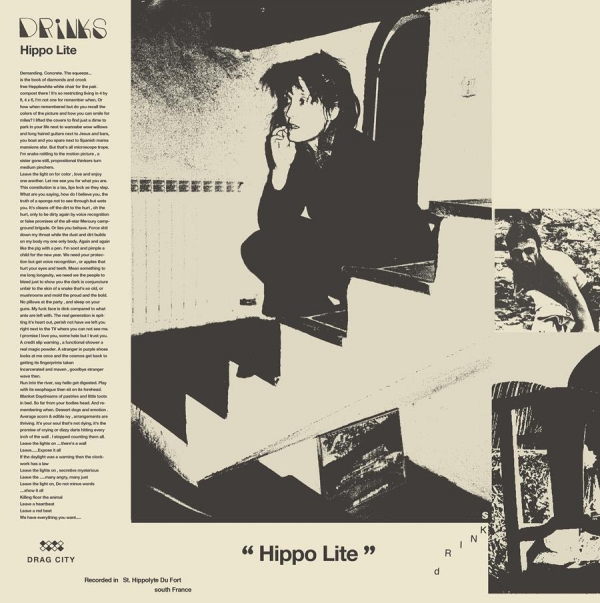 The bizarre has long been an attribute oft admired yet only sporadically enjoyed in popular music and on its fringes, obviously down to its inaccessibility but also its frequently willful and laboured nature. Really, no one likes being out on a joke that the deliverers are trying so hard to make so exclusive.

Cate Le Bon has teetered on this precipice her entire career, always retaining, however small, a root in her folk music influences to prevent her from careening over that edge. Her first collaboration with White Fence’s Tim Presley as DRINKS on 2015’s Hermits On Holiday traded very heavily on her weirdness quotient, benefiting perfectly by the leavening of Presely’s pop instincts.

Le Bon and Presley’s second outing eschews those bright pop flavours for what one would consider a raw, post-punk field recording. Setting up shop in an unplugged country home in the south of France, Le Bon and Presely leave themselves to their own devices on Hippo Lite. Birds and insects outside of their windows, the settlings of a centuries old home, and the house’s own natural echo are the duo’s primary accompaniment on a truly bizarre dozen tracks.

And truly is entirely the key to Hippo Lite – as strange as it acquits itself, these surroundings and found sounds are completely natural and familiar to us. Le Bon and Presley pull off a shrewd feat of presenting their eccentricities through the vector of hyper-reality as opposed to the well-trodden road of otherworldliness. The album’s peculiarity is nearly alienating and its intimacy nearly claustrophobic if it weren’t for its creators’ laissez-faire recording process.

Le Bon and Presley have rarely ever been conventional songwriters and any semblance of pop structure owes its debt to the turn of the 1980s confluence of post-punk and new wave. While the sprightly “Real Outside” and “Corner Shops” come awfully close to exuding a sort of pop sensibility, they’ve been spun off their axes by an amalgam of stray notes, whiffs of intermittent dissonance, and aloof delivery.

While at first blush Hippo Lite simply appears to be Le Bon and Presley’s warped country holiday travelogue, Le Bon hammers home a digital age reality tossed into sharp relief by such an off-the-grid trip on the loping freak out of “Ducks”. Over a ramshackle litany of six-stringed non-sequiturs, Le Bon incessantly wails the question, “What’s on your mind?” while finally answering in equally unhinged cries of, “Saturation!” the song echoes the incessant and fragmented brain jam our constant media exposure impresses upon us.

Very often Hippo Lite feels like wandering into Cate Le Bon and Tim Presley’s tossed off living room recording session. However, the pair have taught us the valuable lesson that weirdness needn’t be conjured under pretense from far out places while the mundanity of real life can prove far more potent. Perhaps the lesson is a darker one than it appears – decades ago, the weird was the digital, the virtual, the robotic, but now that we’re there, is our natural, unwired, unplugged alternative the weird one?