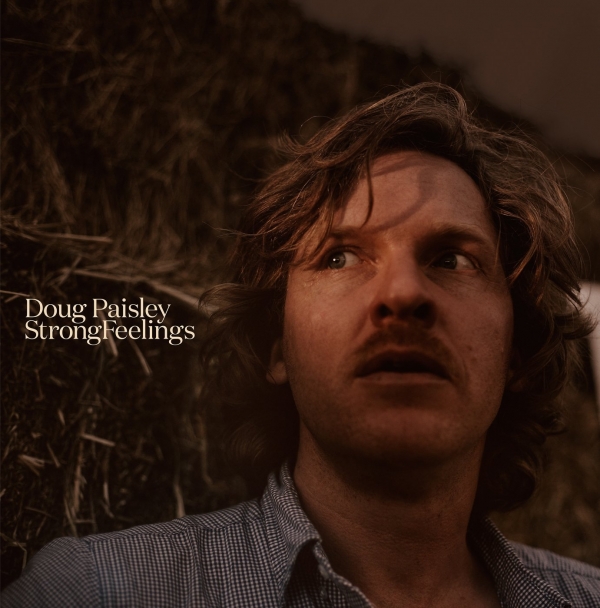 Doug Paisley’s third solo outing Strong Feelings, finds him with a more up-beat and rhythmic band accompaniment than his self-titled debut and its follow up Constant Companion. Garth Hudson of The Band provides keyboards, and Mary Margaret O’Hara makes a couple of delightfully impressionistic vocal appearances, alongside many other stalwarts of the Toronto music scene. The sound that emerges has one foot firmly in the best singer songwriter sounds of the 60s and 70s but what emerges is real and vibrant and contemporary.

Lyrically, there’s a nostalgia in the first half of the record – with opener “Radio Girl” celebrating 25 years of memory through music (“I turned the radio on/25 years ago/they were playing your song/I looked for you on the town/thought I was tracking you down/but you were there all along”) – wrapped in a joyful twangy AM classic sound. The feel continues with a beautiful organ driven reflective and country- rhythmic “Song my Love Can Sing” – a song driven and decorated by Hudson’s keyboards. “It’s Not too Late (To Say Goodbye)” takes the nostalgia for a relationship almost to a desperate level (“Holding out for something from the past/ It’s just burning brightly/ But it won’t last”) with a constant jangly beat – like the Fallen Angels would sound if they and Gram Parsons were still with us. “Our Love” slows things down a bit, – wryly reflective and a nod back to Constant Companion.

All this softens you up for “What’s Up is Down” – a more gravelly sounding Paisley, with a mellow cocktail lounge like accompaniment, and a gloriously behind the beat vocal from Mary Margaret O’Hara – a love duet with sleepy mellow sax too.

The mood changes for the second half of the album. “Old Times” is infused with organ and a different vocal style – Dylan in the John Wesley Harding era – with a dark tone and a desperation and regret that goes further than nostalgia. “I Ain’t Gonna Wait for You” has a gorgeously reflective accompaniment. “Growing Souls” continues in this vein with some wonderful wobbly keyboards – love and mortality and reflection. ‘To & Fro’ is a mini cowboy epic with deeper vocals and lots of sharp guitar work that really does derive from post crash Bob Dylan. ‘Where the Light Takes You’ is a jangly guitar/ organ/synth driven workout that leads magnificently into the beautiful closing duet with Mary Margaret O’Hara “Because I Love You” . A simple love song with warbly whistling, it sums up the melancholic joy of this album, its soundscape based in the late sixties/ early seventies – but really saying something new about love, memory and the perhaps false comfort of nostalgia. A compelling listen, and a new side to Doug Paisley.