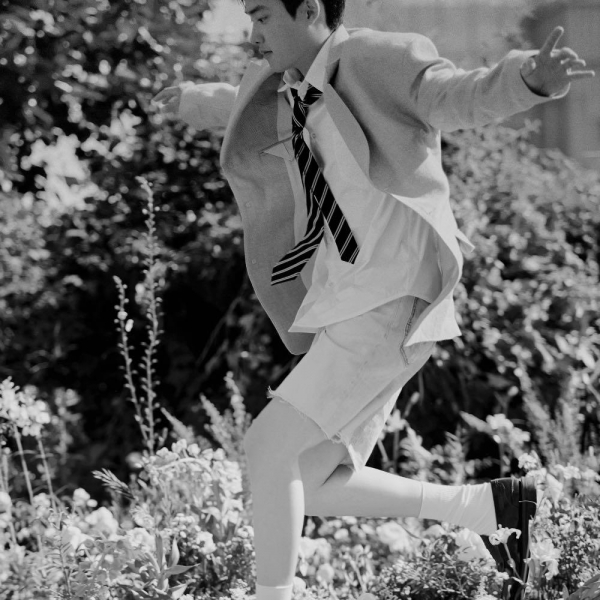 After a long wait for a fully-fledged venture into the solo arena, D.O. delivers on all possible expectations with a fittingly warm cocktail of genre-bouncing, and plenty of style, in Empathy.

“Rose,” its opener, bounces along with acoustic folk melodies, driven by its peppy guitar riffs and undercurrents of bass. The EXO member’s vocals are bright and comfy here, smoothly appearing between chants in the verses, and powerfully delivering one of the catchiest choruses of the year so far. “I might not have a fancy car, but I fancy you, so give me a chance,” D.O. sings in the English version of the song, seamlessly capturing the raw joy of unrestrained love in the process. It’s a terrific lead-single; lyrically fresh courtesy of the multi-talented singer’s songwriting skills, and unabating in its smile-raising charm.

“I’m Gonna Love You” continues the momentum, a breezy pop number which sleekly moves along with skeletal instrumentals, driven by its vocal quality and a smartly utilised feature from the bristly-voiced Wonstein. The complementary styles work wonders here, in turn making for a captivating B-side cemented by a strong hook.

“My Love,” takes advantage of D.O.‘s understated falsetto particularly well, playing off the lyrical rhythm guitar melodies and heartfelt lyrics about the scenery seen when walking with a lover at night with an adept flair. It features a somewhat surprising production credit from eaJ (also known as Jae from DAY6), but it’s clear that the two’s styles are well-suited.

Meanwhile, “It’s Love” ups the resonance with Latin-tinged acoustics and a meatier rhythmic backbone, the softer yet still soaring vocal delivery a clear selling point. As it progresses there are subtly danceable qualities to the bristling guitars, marking this as a track well worth a late-night repeat.

But whilst a lot of Empathy is geared around the snugness of love, and the emotions surrounding that, “Dad” changes gears completely with a sucker punch of vehemence. A ballad which expresses both vulnerably and assuredly the feelings towards one’s father after becoming an adult, it’s decidedly emotional, syringed with emotional guitars and, in some places, near a capella vocals which refuse to waver in their sentiment. It’s a phenomenal effort, and one which most will pinpoint as a real highlight.

Before the English version of “Rose” and the Spanish version of “It’s Love” (“Si Fueras Mia”) comes the final cut, “I’m Fine.” A jazzy R&B track co-written by D.O., it rhythmically moves with a consummate flair, the vocals consistently supple and warm. It’s a lovely ending to a beautiful album, being that it’s memorable without forcing anything onto the listener.

Overall, Empathy is a truly excellently put together record. Vocally flawless, it has something for everyone packaged inside a breezy 25-minutes which feels as dainty as five. Hopefully, this is only the beginning for D.O.’s solo career, because it’s as evident here as ever that the pop singer is a genuine musical A-lister.