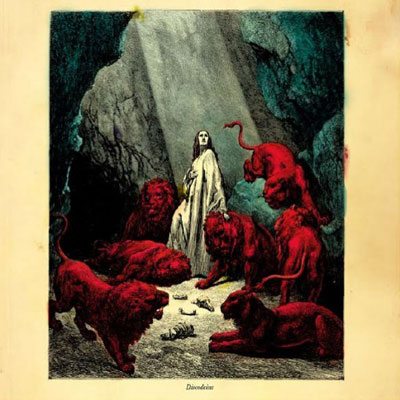 The debut album from Parisian electro duo Discodeine has been causing stirs ever since the apparition of their suitably-controversial-to-get-people-talking-but-not-too-disconcerting-to-be-off-putting video for leading single ‘Synchronize’, featuring the sublime vocals of the one and only Jarvis Cocker. Comprised of Pilooski and Pentile, two relatively well known French electro artists/producers, the duo have already released a handful of EPs under their united moniker, but their self-titled debut will undoubtedly lead to their name being dropped far more frequently on the other side of the Channel.

Being a ridiculously big Jarvis fan, it took a good two weeks of listening solidly to ‘Synchronize’ before the rest of the album even got a look in. The song is incredibly addictive, it’s simply constructed with magnificent little touches: barely audible, yet ghostly female backing vocals, a ringing synth hanging onto the end of each chorus – it is positively irresistible. But when the rest of the album was finally given the chance to be aired, unforeseen talents and unexpected treasures unravelled to prove that Discodeine’s talent spans much further than this one song.

‘Invert’ carries over the irresistible synth sound which ensnares listeners in ‘Synchronize’, just one example of the ways in which Discodeine have strived to create fluidity and continuity on the album. A real stand out song is the steel drum infused ‘Falkenberg’, an absolute cracker of a track – ‘cracker’ being a word that this reviewer doesn’t throw around easily. A gentle, almost calypso melody is introduced by a fairly inoffensive synth, which builds into a crescendo of everything that makes Discodeine transcend classic electro boundaries. Personality is littered throughout the album, but especially on this track through vocal atmospherics and percussive build ups. It’s light, it’s incredibly catchy and it makes you skip back to the start over, and over again. ‘Homo-Compatible’ on the other hand is a much darker affair, low note beats and rhythms play host to a fairly discordant orchestra of synths – stark, with gloomy undertones yet unavoidably enticing.

The most striking thing about this album is how versatile Discodeine prove themselves to be. Yes, it’s an electro album, where tracks such as ‘Ring Mutilation’ will, given the opportunity, scathe through the speakers to completely consume the inadvertent listener. But there’s such an appealing simplicity to it all. There are no heavily over-thought melodies, nor clever tricks with super-new technology. Instead, it’s an album of beautifully constructed, attention consuming tracks matched with a diverse range of live instruments – ‘Antiphonie’ even featuring a prominent harp melody before diverging into a Justice-esque synth build up and fall out. Why not?

It took a while, but after finally venturing further than ‘Synchronize’, it’s clear that this song is but a whisper, a cheeky flash of what this duo has to offer. The intricate planning, the dedicated production and surprisingly, the musicianship of the whole situation makes this an album very much worth listening to, and then listening to again just to be able to grasp how well executed the album is, and how masterful Discodeine really are.