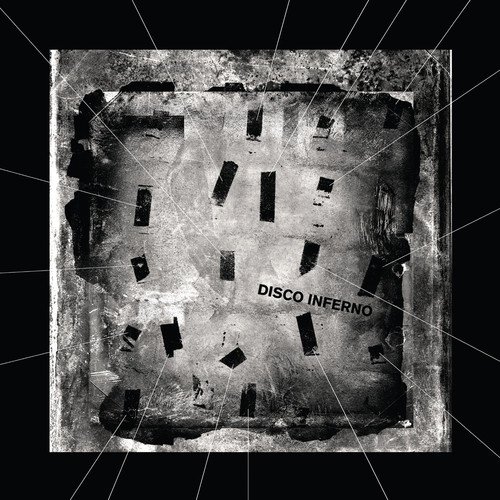 Disco Inferno burned bright and stayed in motion even if they did so in relative indie-level isolation. In Debt, a collection initially put out by Che Records in 1992 and reissued here by Rocket Girl with the previously unreleased “In The Cold” added, brought together the young Essex trio’s earliest recordings and, intentionally or not, became a capsule of the first phase of the band’s creative development.

The release of The 5 EPs in 2011 provided an overdue opportunity for writers and fans to publically gush and reappraise a band that popular music history had seemed to have skipped over, and it gave Ian Crause, drummer Rob Whatley and bassist Paul Willmott a present audience for their past work. The 5 EPs captured what was effectively Disco Inferno’s second phase, when they started using samplers and came up with a method and sound that would offer a kind of alternate starting point for what became known as post rock. In Debt, on the other hand, could be seen as an alternate ending point for post punk, dissolving its angularity and anger in a wash of dreaming delay.

Influences like early Wire and Goth-era Cure weren’t entirely in vogue in 1991. At the time, Wire themselves were in “mk II” mode, and New Order had long since let in the light. Disco Inferno’s arrival might have been one of those instances where a band is late to the party and early to the revival, were it not for the uncalculated personal stamp they put on the style. “Broken”, a stray track included here that wasn’t on the "Entertainment"/"Arc In Round" 7”, Science EP, or Open Doors, Closed Windows LP that In Debt ties together, squeezes the stoic majesty of Joy Division’s “Atmosphere” in its impatient and passionate teenage hands.

Although they weren’t relying on those samplers yet, the instrumental repetition often feels looped, not live. “Waking Up” begins like a number of songs on In Debt: a heavily delayed guitar line spirals around itself, the drums drop in to push the song forward, Crause’s muffled and monotonic voice delivers simple but effective imagery (“A sky without a god/Is a clear, clear sky”). A deceptive amount of pop instinct corrals their jamming, but the overall effect can be like watching someone make a giant soap bubble in slow motion, stretching until it suddenly pops and disappears. The songs from Open Doors, Closed Windows find an increasingly vibrant, versatile Disco Inferno emerging, but the whole of In Debt remains an enlightening reminder that the path of rock music doesn’t always stick to pre-set storylines.