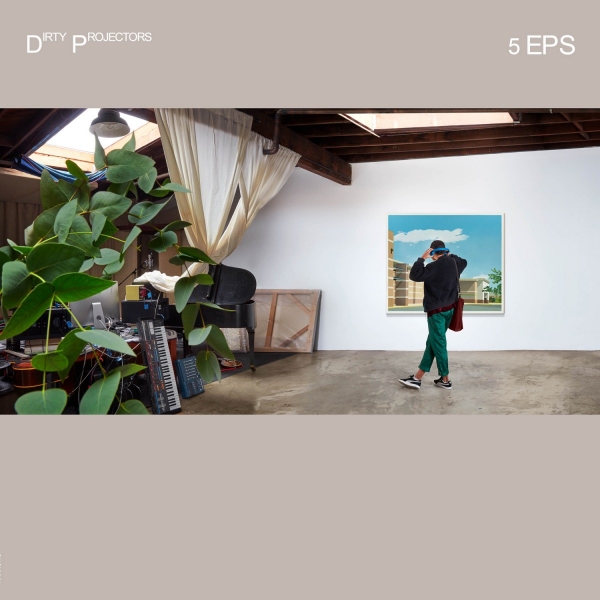 Many associate Dirty Projectors with difficulty. Although his music is often sweet and harmonic, Dave Longstreth’s compositions can also be deliberately evasive, and with the project being an amorphous cast of revolving bandmates and styles which span baroque pop, Brazilian folk, alt-R&B and classical composition, it’s no wonder some have found them too slippery to get a hold of. 5EPs draws a clear line in the sand however. Once a solo project, Dirty Projectors are now a band-band with the five individual EPs showcasing a different member, with the fifth, Ring Road, bringing them together as a new formed act. After a year-long rollout, they are now being released as this anthology.

Far removed from the trickiness of the Dirty Projectors of old, “Search For Life” revs with some glowing choral harmonies, like an old Peggy Lee 7”, and ends with a sweep of shimmering violin and cello. Through so many of these songs, a great deal is achieved in less than three minutes, and the result makes these miniature collections feel far grander. There’s a great proclivity for prettiness throughout, from the rich nylon guitar which opens the record to the harmonies Longstreth has been infatuated with since 2002.

Amongst these intricate compositions are tight pop songs, most directly from the four tracks of the Felicia Douglass-led Flight Tower EP. These four cuts continue Longstreth’s dalliance with R&B, and share more in common with Kelela than Animal Collective. “Lose Your Love” is one of the brightest and most loveable pop songs of the year, with Douglass’ voice pitched higher and higher until it’s a squeak. Blending the kooky with the fashionable has long being a fixation of Longstreth’s, and is abundant here from the chopped and screwed vocals of “Self Design” to lyrics which plead: “please don't be magnanimous / protect your neck”.

The Super João EP, sees Longstreth take centre stage with four songs which channel the ethos of João Gilberto, the Brazilian bossa nova icon who passed away last year. These aren’t four Bossa Nova tracks, but capture the looseness and sweetness of Gilberto’s playing. “Holy Mackarel” is another ear-worm which dabbles bizarrely in images of fish and werewolves, while “You Create Yourself” and “I Get Carried Away” are sweet devotional songs which capture in vignette the themes of reinvention and commitment which run like a thread through all five releases.

The firmest testament to the exploratory nature of the new Dirty Projectors is the remarkable Earth Crisis EP. Sewn from instrumentals which were first recorded in 2008 for a scrapped orchestral version of his Rise Above record, what Longstreth salvaged from those recordings are a Stravinsky-indebted collage of ecologically-minded songs, where gently throbbing woodwinds combine with the deep timbre of Kristin Slipp’s voice tell a tale of environmental collapse and resilience.

Sharing themes of discovery, liminality and transition, the EPs come together with a sense of cohesiveness. The series has yielded an LP which pulls off what Dirty Projectors have been circling around since 2009’s Bitte Orca: dense in concept, intricate in composition yet nimble and bright in delivery. This album is fun to listen to. The songs breeze by. It’s a 20 track album which feels half the length and the Dirty Projectors are now resolutely a band, and a band reborn.