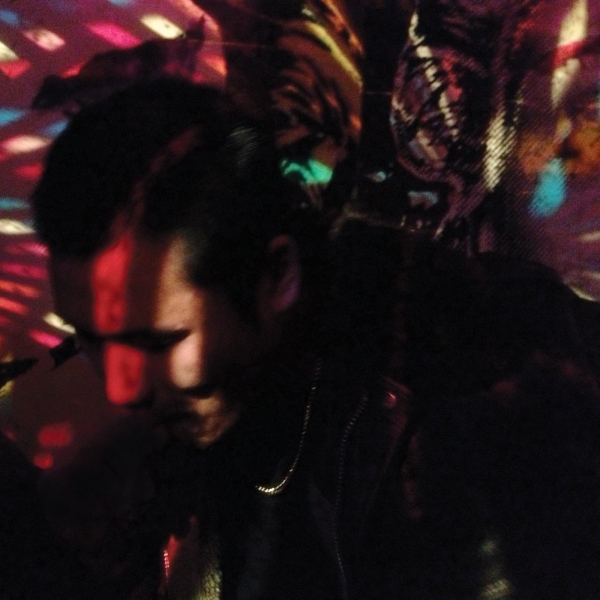 Last time round, Dirty Beaches was looking out across the states. His breakout record Badlands was a brief 27-minute detour through the dark underbelly of Americana, littered with reference points that suggested someone deeply intimate with the subject.

The title evoked the double-denimed menace of Martin Sheen in the Terrence Malick film of the same name. Taiwanese born, Montreal based man Alex Zhang Hungtai’s hiccuping vocal brought to mind a ghoulish Elvis turned wild by too many thrusting gyrations. ‘Sweet 17’ seemed to draw on the ephebophile passions of Humbert Humbert, a fellow outsider, traveller and observer of America, while even Hungtai’s own pompadoured lone-wolf image made him look like the kind of greaser that might pop up in a dark episode of Happy Days and pull a switchblade on The Fonz. Where most saw a well-manicured lawn and a white picket fence, Dirty Beaches saw the swarming bug’s nest sitting beneath the surface.

On Drifters/Love Is The Devil Hungtai goes bigger and, in the wake of the break-up of a long-term relationship, turns that eye for the darker side of human nature on himself in what feels like his cinematic debut. Dirty Beaches has always been an immediately visual project; the kind that produces records comprised of characters and narratives rather than verses and choruses. Accordingly, just in the last month Hungtai released his third film soundtrack, Water Park, whose serene, under-the-water ambience lends the short film it accompanies (about a shopping mall in Edmonton, Canada — naturally) a celestial awe; as if Hungtai was already imagining something bigger, more widescreen. And so Drifters/Love Is The Devil, a double concept album of sorts that tells ‘the same story but from two different perspectives’, is Hungtai’s shot at creating something cinematic in scope as well as style.

The first half of the diptych, Drifters, is a study in demented self-obliteration; a montage of gaudy jump cuts detailing all kinds of material excess. And for all Hungtai’s cinematic pretensions, it’s this kind of visceral overload and grimy minimalism – building on Badlands’ prototype, pushing two or three elements to 11 until the whole song trembles – that Dirty Beaches still does best. ‘Casino Lisboa’ is a louche, obnoxious lounge crawl punctuated by Hungtai’s wide-eyed yelp and drum machine snare hits that splutter forward like a bad drunk. ‘I Dream In Neon’ deals in overbearing organ and drone textures that sound like something Laura Palmer might have done coke to in the Pink Room. ‘Au Revoir Mon Visage’ places Hungtai – sweaty, panting – in some bad metaphysical dream, accompanied only by a maddening, vaguely tribal drum roll. ‘Mirage’ Hall’ collapses in on itself in an orgy of Harley Davidson revs, with Hungtai screaming, as if waking from a night terror, “It’ll take your head off!”

What ‘it’ is exactly is the issue of Love Is The Devil, which deals with the interior world obscured by Drifters’ blown-out overload and sees Hungtai in his contemplative, ambient soundtrack mode that so irked on Badlands. Here his abilities seem more fully formed and kind to the type of listener who isn’t prepared to connect the dots of his sometimes lean style. ‘Berlin’ and ‘Alone at the Danube’, two seven-minute rainy-day reminiscences built around a frosted, metallic guitar sighing between two or three chords, have Dirty Beaches at its most melodic and wistful.

The latter, ‘Danube’ could even be described as pretty; when a celestial synth tone comes in about half way through, sounding like a sudden ray of sunlight breaking through clouds and shimmering on the waters, it’s a moment that justifies the sometimes unfulfilling cinematic economy that Hungtai can take with his music (of particular note: the undercooked noir of ‘Greyhound At Night’, and’ ‘Woman’, which feels out of place attempting the kind of mad repetition of Drifters in a more ambient voice). Similarly the title track, ‘Love Is The Devil’, a sombre yet melodramatic dirge replete with MIDI orchestration that leaves it sounding like an outtake from Badalamenti’s Twin Peaks soundtrack, is powerfully raw in its dejection.

Like many double albums, Drifters/Love Is The Devil has the feel of an artist trying on new identities and exploring – like one of the homesick and homeless in his songs – beyond the peripheries of their comfort zone. Talking to Pitchfork in 2011, Hungtai spoke passingly of ‘a lot of B-sides that will never seen the light of day’ that ranged from ‘dance songs to hip-hop songs to jazz’. The record isn’t quite the maximalist’s paradise where all those discarded demos and tucked away B-sides finally come to life. Long-time fans will recognize polished up blueprints from earlier records, and even in its prettier, cleaner moments it’s still obviously a record by the man who brought us Badlands; the same guy fascinated by the past, deferential to his elders, who uses worn, black-and-white photobooth snaps of his courting parents on his 7’ covers.

Drifters/Love Is The Devil isn’t always an unqualified success, but more often than not it displays Dirty Beaches as a project increasingly adept at the scattershot of styles, imprinted with Hungtai’s own recognisable mark.