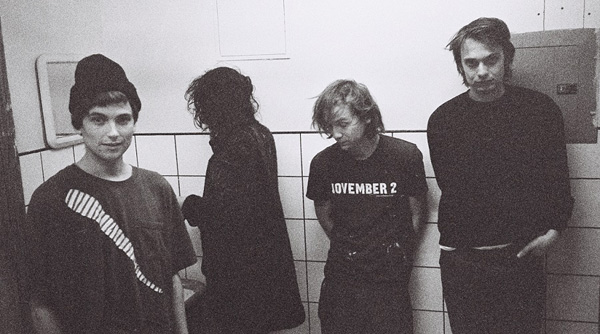 Signed to rightly revered label Captured Tracks (who’ve also given us Blouse, Craft Spells, Holograms and Wild Nothing) and formed by part-time Beach Fossil live guitarist Zachary Cole Smith with ex-Smith Western Colby Hewitt on drums, DIIV’s sound is as dreamily reverb-heavy and ridiculously cool as you might expect. But there’s a compelling depth to their playing and ethos that marks them out as more than just another bunch of cute, well-connected Brooklynites.

Following a US tour with the band he’s been playing on and off with for two years, Smith confined himself to a stuffy painter’s studio in Bushwick for the summer to conjure up the songs that would eventually become Oshin, foregoing running water but inspired by Lucinda Williams, Arthur Russell, Faust, Nirvana and Jandek records, authors like N. Scott Momaday, James Welsh, Hart Crane, Marianne Moore and James Baldwin and “dreams of aliens, affection, spirits and the distant natural world”. He then claims to have looked to astrology when picking the players that would become his four-piece band – everybody in DIIV is a water sign – aquatic themes subsequently cropping up in song titles and the tidal crash and roar of their delivery.

Instrumental ‘(Druun)’ is a gorgeously melancholic opener; layers upon layers of shimmering guitars propelled by punchy drums paving the way for the pacey rattle and vocal haze of ‘Past Lives’ – an early highlight. ‘Human’ features a brilliantly jarring post punk bassline and clipped beat, and there’s a real swagger and malevolence to ‘Air Conditioning’’s spidery guitar lines, the powerful ‘Doused’ and thunderous ‘Oshin (Subsume)’. DIIV then counter this urgent spikier side with broodingly beautiful early Cure-esque epics like ‘Wait’ and ‘Earthboy’, the swoonsome melodies of ‘How Long Have You Known?’ and the gleaming riffs of ‘Sometime’ and ‘Follow’. It’s not a record you just dip into, you’ll want to devour the whole thing.

Oshin’s thirteen songs are so precisely crafted and impressively executed (the drumming and guitar playing in particular are spellbinding) that DIIV sound like they’ve been together for years. But early tracks like ‘Sometime’ were written, recorded, posted online and picked up by blogs just weeks after they formed. It’s rare for a band to hit upon something this special so early on in their career and then be able to hone that initial energy and excitement into a debut as accomplished as this. We thought the water sign connection between them was just a great story, but maybe Smith is onto something with his pseudoscience after all…