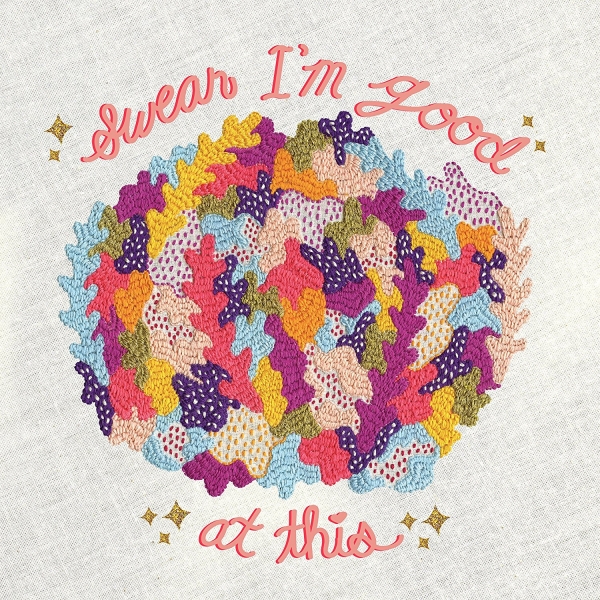 Coming-of-age films are, by this point, a dime a dozen. From Rebel Without A Cause, right through to The Edge of Seventeen - with that obvious stop off in mid-80s John Hughes Land - the themes of teenage angst, lust and hormonal confusion have been mined like nobody’s business.

But a true coming-of-age album? Now those are a rarity. Obviously many bands have tackled the struggles of growing up, and there are albums that are so synonymous with growing up, but very few devote more than one or two songs to it, never mind a whole album. It’s usually a feeling rather than explicitly diving into it.

And that’s where Diet Cig and their thrashy, sparky debut Swear I’m Good at This comes in, graffitied diary and hip flask of vodka in hand. It’s a distillation of Alex Luciano’s Tasmanian Devil-esque chaotic exuberance that make their live shows such a thrill. And, with Noah Bowman and their electric chemistry, Swear I’m Good at This is a thrill ride that ends way too soon.

At just 30 minutes long, it never outstays its welcome and, often times, you’ll find yourself hitting ‘repeat’ just to get another hit. It’s in stark contrast to the rise of the long, long plays (LLP) such as Drake’s More Life and its 81 minute run time.

Yet it says a lot that Diet Cig have manage to chock their time full of great tunes. Everything is short and snappy, filled with a youthful euphoria and feeling like its about to start climbing the walls and jumping from sofas any second.

From the moment Luciano says “Ready?” at the start of fantastic album opener “Sixteen”, and the incredible hurricane that is Luciano and Bowman together kicks off, it’s hard not to be taken by this record.

The most simple of moments can even bring on a Proustian rush, like the fuzzy riff towards the end of “Barf Day” taking me back to my teenage years and seeing sweaty bands in sweaty bars that I definitely shouldn’t have been in. It’s the most fleeting of things can remind you of the magic of music.

That being said, for all the intoxicating fun Swear I’m Good At This captures, there’s a real intimacy to the record which strikes deep. Whether it’s being pretty frank about the awkwardness of teenage sex (especially when your partner shares the same name as you) on “Sixteen” or revelling in the giddiness of a new found crush on “Leo”, it often feels like we’re flicking through Luciano’s diary and yet still feel wholly relatable.

There’s also the defiance and no bullshit attitude of young adulthood in the lyrics too. On the rollocking closer “Tummy Ache”, Luciano yells “"I don't need a man to hold my hand / That's just something you'll never understand!” after tackling how hard it is to “be a punk whilst wearing a skirt”.

“Link in Bio”, with its wonderfully tongue-in-cheek title, is all about Luciano’s frustrations at how women are often treated: “They say speak your mind but not too loud / And you should love yourself but not be too proud”.

That mix of fun and feelings is something Luciano has talked a lot about: being punk, being defiant and standing up for what you believe in while also allowing yourself to still feel and understand your feelings. Here you fully understand what she is talking about. It’s an album of trying to find your way and figure out who you are through all the awkward mishaps, shitty relationships and fear of looming adulthood that teenage life and your early 20s brings.

All these themes are infused with that scrappy, DIY feel and solid pop hooks to create some explosive anthems that can pick you up in the tough moments or just fill you with joy the rest of the time.

Go to any Diet Cig gig and you’ll see teenage girls with wild hair and middle aged men with no hair screaming the words back from the front row as Luciano flings herself across the stage and Bowman is transformed into Animal from The Muppets behind his drums. Diet Cig truly are for everyone.