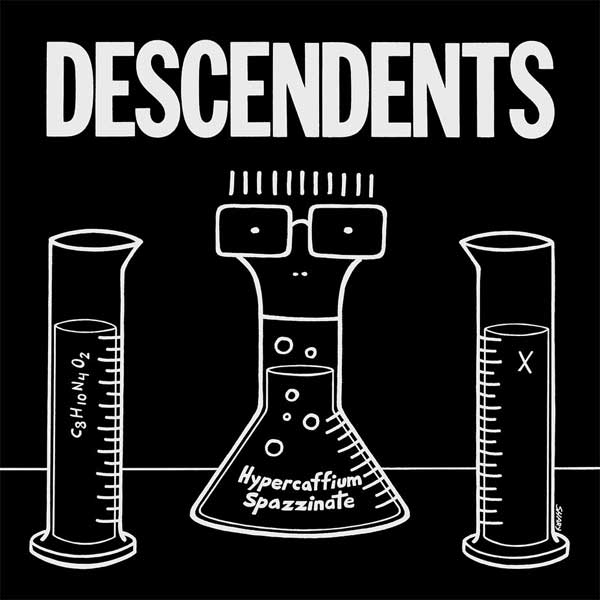 With Blink-182 releasing their comeback album earlier this month, you’d be forgiven for assuming that that was the most important pop-punk record of not just the month, but the entire year. You would, however, be dead wrong.

Arriving 12 years on from their last album, Hypercaffium Spazzinate is a comeback album of blistering proportions. Managing to quash any doubts about its relevancy within the opening 75 seconds, it picks up almost exactly where Cool to Be You left off, proving Descendents have still got something left to give.

Where previous Descendents' records have felt self-referential in the sense of recurring themes or ideas, Hypercaffium Spazzinate wryly references previous songs, drawing attention to the differences between the band today, and their younger selves. "No Fat Burger" for instance, is a direct reference to Fat EP's "I Like Food" and laments no longer being able to eat what you want thanks to a hereditary condition.

For the most part however the band address more serious issues, such as singer Milo Aukerman's recent redundancy and disenfranchisement with biochemistry – the field he infamously went to college for. Such topics are dealt with with traditional humour and brevity however, and rather than becoming hung up on the negatives like they could have, the core of the record is formed around the new lease of life it seems to have afforded the members – Aukerman in particular.

Vocally, Milo is at his most driven and at times his most aggressive. Such vehemence in his delivery is bolstered by the ever-tight rhythm section and unhinged lead guitars; the entire record harbouring a self-confidence that reaches much further than the lyrical self-deprecation it contains.

Despite Hypercaffium Spazzinate feeling as referential as it does, it's surprising that there's nothing obviously referencing ALL, the attitude and mantra that populated some of their earlier records. The sentiment is there however, it's rooted in the record, its sheer energy, and the attention which has gone in to making it. Most importantly though, it's rooted in the Descendents themselves, a band without who there would be no Blink-182. There'd arguably not even be a pop-punk. It's for that reason that Hypercaffium Spazzinate is the most important pop-punk record of the year. Shit. It might even the most important record of the year.