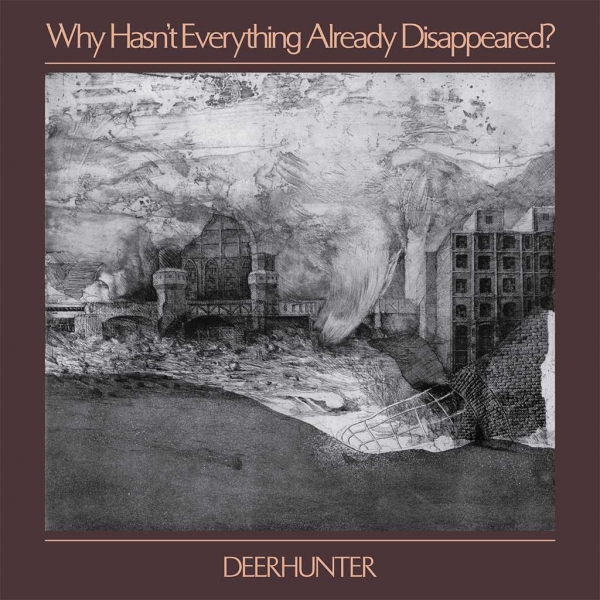 Despite their best efforts Deerhunter are yet to truly break into the mainstream consciousness.

They have everything a modern rock band needs to hold and sustain mainstream appeal in 2019, and have had it since they released their debut in 2005. But for some reason, they’ve always fallen just short of breaking through into the big leagues in the way that many of their contemporaries have.

They have a charismatic, borderline-pretentious mouthpiece of a singer in Bradford Cox, so perhaps people find him abrasive rather than endearing? They have, by the last count and depending on who you ask, released at least three masterpieces - perhaps their critical acclaim is offputting? Their sound, at once instantly recognisable but always different, is deftly constructed and elegantly executed – maybe they’re too "arty" for the layman?

Whatever the reason, Why Hasn’t Everything Already Disappeared?, their first LP since 2015, is a step in the opposite direction. Now, they have embraced their singular vision to the exclusion of mainstream appeal: in the press release heralding the album, listeners were asked to consider whether another Deerhunter album was necessary, or whether it would even be relevant in 2019. The answer was prescriptive: it would be necessary, and relevant, but “perhaps only to a small audience.” So, it seems, they’ve doubled-down on their strengths, played up their oddness, and polished everything to within an inch of its life.

Recorded in rural Marfa, TX, with producer Cate Le Bon, her DRINKS co-conspirator Tim Presley and a clutch of (clearly) likeminded craftsmen, WHEAD? continues in mostly the same vein as their previous album – the sadly underrated and presumably misunderstood Fading Frontier. The sepia tones of that record are brought into focus here, the edges are sharper and the brew a little more potent.

The record opens with “Death in Midsummer”, a soft-focus fairground waltz. It’s classic Deerhunter – it could have been on any of their previous records, excepting possibly Monomania. A beguiling opener.

The beautiful “No One’s Sleeping” is, apparently, a rumination on the murder of MP Jo Cox – though you would never have known from the sonics. It’s built around a woozy, shuffling rhythm, and features layer after layer, wave after wave of misty golden guitar and a robust, thunderous bass. Much like the following track, it has Brian Eno’s fingerprints all over it.

Instrumental interlude “Greenpoint Gothic” is a faithful recreation of the kind of krautrock Brian Eno was turning David Bowie onto 40-odd years ago. It’s described as an “architectural interlude for synthesizer and drums” in the press-kit, and that’s about right. It would certainly have benefitted from being about ten minutes longer.

The luxurious stroll of “Element” accelerates mildly into the rolling strut of “What Happens to People?” Both are exquisite, and play to the pastoral dreaminess that the environmental context of the album necessitates. These are songs recorded in a vast wilderness, and they sound like it. While not songs of isolation, they’re as insular and introverted – even childlike – as anything Deerhunter have done.

What follows is a trio of delectable delights. You have, first, the experimental weirdness of “Détournement”, which is clearly Bradford arsing about, improvising in a heavily processed robot voice. That it doesn’t get tiring is a miracle, but largely down to the '77-era Bowie backing track. Then you have “Futurism”, which is probably the most straightforward piece on the whole thing. Scuffed but pure, rough but pristine, it’s a wonder why it wasn’t released as the first single – it debuted all the way back in May last year. Rounding out the trifecta is album highlight “Tarnung”, which features backing vocals from Le Bon, and was intended to sound like “a walk through Europe in the rain”.

The album proceeds with the plastic, synthetic funk of “Plains”, an ode to James Dean, then closes with the creeping deathliness of “Nocturne”. “Nocturne” sounds, quite literally, like a machine dying, and is perhaps the most explicit science fiction track on an album described as a science fiction album about the dystopian present day.

While time will decide whether it’s the best Deerhunter album, WHEAD? can lay claim to being the most ‘Deerhunter’ Deerhunter album. It’s utterly, completely, resolutely and defiantly them. It’s futuristic but warm, nostalgic but distant, pretentious but human. It’s a mess of contradictions, a jumble of cohesive ideas – and a reminder, if one were needed, what a great feeling it is to be part of a “small audience”.