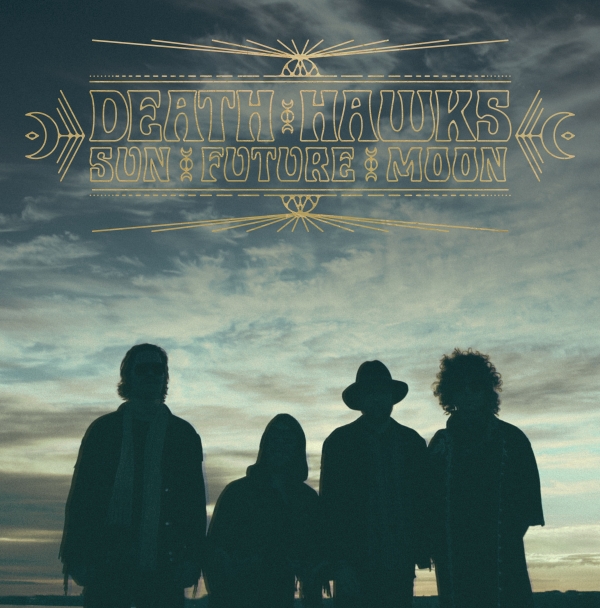 Death Hawks are currently touring Finland with Circle (whose recent LP Pharaoh Overlord is one of the year’s hidden gems). Sun Future Moon suggests the quartet may have picked a few tips from Jussi Lehtisalo and co. along the way.

Following the expertly executed if slightly derivative cavalcade of psych-rock templates on 2012's debut Death & Decay and the frost-bitten shamanic rituals of 2013's self-titled - and superb - follow-up, the propulsive kosmische grooves that populate Sun Future Moon carry a whiff of the epic space truckin’ intent of, say, 2010's Rautatie by the legendary Gonzo-Kraut maniacs from Pori, Finland. That's where the similarities between Death Hawks and Circle end, however.

It's been relatively easy to trace the lineage of Death Hawks' past workouts. This time, the mixture of Autobahn-cruising motorik repetition, streamlined yet luxuriously layered arrangements - analogue keyboards abound - and increasingly tight grip on tune-craft that propels the sax-enriched "Ripe Fruits" ever upwards sounds like no one else. Whereas Death Hawks the album specialised in an untrimmed sprawl, the glimmering likes of "Beyond Thyme" - equipped with a startlingly beautiful instrumental coda that sails towards the heart of the cosmic regions where the titular inspiration of languid opening chant "Hey Ya Sun Ra" reportedly originated from - manage to sound positively limitless despite clocking in at around a relatively conservative five minute mark.

Elsewhere, strange treasures abound: instrumentals "Wing Wah" (could the closing chant "ja ja ja" be a sly nod towards Death Hawks' UK debut at the 2014 London event of the same name? Possibly not) and "Seaweed" sound like selections from soundtracks for vintage dystopian disaster flicks that didn't get made, whilst the anthemic closer "Friend of Joy" tips its flower-sprouting, freak flag flying hat towards the band's familiar far-out Aquarian Age inspirations.

With only the slow-burning "Future Moon" - a bit like Black Sabbath's "Solitude", but short of its solemn majesty - and quirky robots-on-rampage stomp "Heed The Calling" failing to convince completely, Sun Future Moon is by some distance the band's most powerful statement to date - and most definitely a compelling case for the international renown Death Hawks deserve and, on this showing, demand.