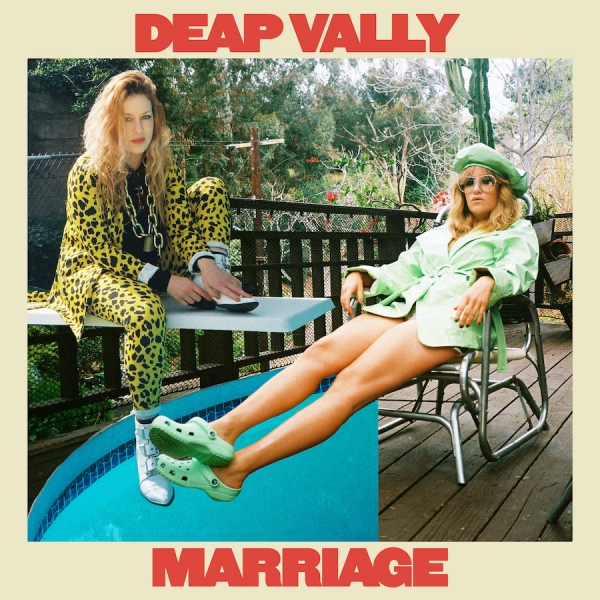 Deap Vally first burst onto the scene with their debut Sistrionix back in 2013, doing well to establish themselves as particularly loud and proud rock ‘n’ rollers with bite, despite being a group of just two. Marriage is the pair’s third album release, and while Deap Vally have held on to their signature raucous, ear-splitting energy, it’s the slower tracks that add a new weight to the duo’s onslaught.

Opener “Perfuction” reaches out and grabs you by the collar, proceeding to throw you against the wall, screaming “There ain't no model citizen, Not in Bangladesh or Berlin, It's the same shit, shit we all live in”. A perfectly fast-paced and high-octane introduction. The second track “Billions” is an equally thumping success, and “Magic Medicine” does a good job of evening out the tempo with its catchy melody, while “I Like Crime (fit Jennie Vee)” is dancey rock perfection.

The album's title, Marriage, refers to singer Lindsey Troy and drummer Julie Edwards’ relationship as a band. “Being in a band is like being in a marriage: sometimes it’s magical, sometimes it’s unbearably challenging.” - both women explain. They’ve invited a host of well-respected female artists to collaborate with on the record, including Jennie Vee, Jennylee, Peaches, and KT Tunstall - the latter two joining forces to produce the pointedly sharp “High Horse”. A triumphant acknowledgment of the arguments one might be involved in during the trials and tribulations of being in a band, and the headstrong attitude that is often adopted by one or both of the parties concerned.

Deap Vally are known for their scuzzy rock attributes, which remain, but they’ve successfully pushed themselves to create something a bit different. The somber “Give Me a Sign” is instantly - perhaps ironically - a joy to listen to, with an underlying Queens Of The Stone Age tone to it. While closing pre-released track “Look Away (ft, jennylee)” is the ultimate emotive send-off, proving that Troy's voice can adapt wonderfully to a slower, more soulful style of singing.

Marriage is an impressively balanced album with highs and lows, and songs to make your adrenaline rush while others make you feel perfectly submerged in pensive emotion. The evidence is clear, Deap Vally have really come into their own here, encompassing everything you could ask for from a rock album - ego and bravado diluted by cold hard self-reflection. Look away at your peril.