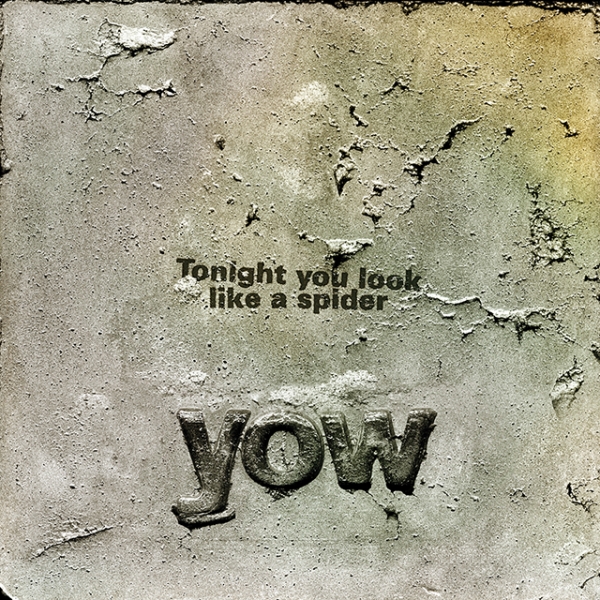 Expecting this to rock? Don’t bother. David Yow has only ever made visceral music, whether howling psychotically with deranged post-punkas Scratch Acid or skulking through the layers of twisted, corroded metal at the Jesus Lizard’s dissonant core. You know it ain’t gonna be pretty, nor will it make for easy listening. Some performers talk about throwing themselves into their art, whereas Yow used to literally fling himself around the stage with such merciless disregard for his own well-being that you wondered what it would take to take him down. This time, however, the 52-year-old LA resident has taken the figurative approach of the former, and wound up in a rather more intriguing mess – an album of textured menace that should surprise those enamoured of his earlier work. Tonight You Look Like A Spider is possibly the most visceral album of his entire career.

If you’ve seen the name adorning the sleeve of this record and figured you know what’s coming, forget it. This ain’t Goat by any stretch of the imagination. That’s apparent from the ominous tones and resounding, funereal thuds that introduce opener ‘Suite’. Yow claims to be a fan of Angelo Badalamenti, which makes sense when you consider the faux-horror tension that underpins the track; like a scene from Twin Peaks cut loose from its visual moorings, and left to drift and decay in the imagination.

Other tracks have hints of familiar territory – a fractured post-hardcore drumbeat here, a spiralling bassline there – but they never approach the same level of cathartic destruction as his former charges, and that familiar gruesome yelp never makes an appearance. They’re offset by batshit contributions like ‘Senator Robinson’s Speech’, where a (cough) ‘sexually-charged’ text is fed through text-to-speech software, manipulated to a flat monotone and left to float through an unsettling piano spasm; like a blackly comedic monologue set to the world’s drunkest accompaniment. It’s sort of brilliant.

Even as someone who claims not to know how to play any instruments, Yow sure sets the bar high when it comes to channelling influences: Grieg, Tchaikovsky and Prokofiev are amongst the names he’s mentioned in the album’s press build-up. For all that, however, the album is best viewed as an extension of his physical artwork rather than musical endeavours: dark abstractions and brutally grim representations of mood rather than straightforward instancy. It re-articulate the raw power that noiserock acolytes have come to expect from one of its most noted frontmen, and it’s no less striking for that. Besides, a limited edition vinyl pressing of the album came with its own display carved from slabs of concrete by the artist himself – looks like David Yow does make rock music after all.