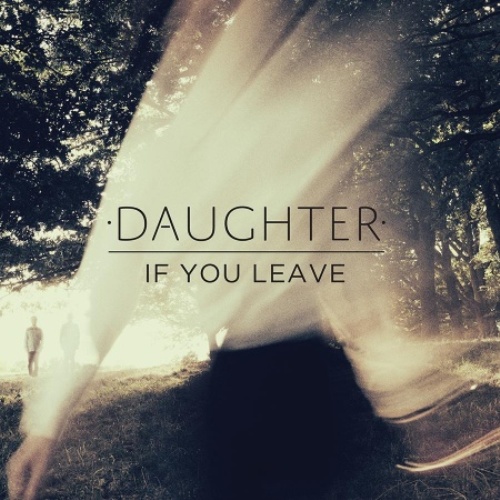 A few weeks back a guy I know was bemoaning his girlfriend’s risible taste in music, and asked if I had any recommendations that might coax her away from the Les Miserables soundtrack that was apparently accompanying most of their time together. Foolishly, I directed him towards Daughter, the London three-piece led by Elena Tonra, figuring that there was little chance that she could fail to be won over.

I was right: she was, and the Les Mis album quietly retired to a dusty corner to await its decomposition as morning awoke to The Wild Youth EP and nighttime fell to ‘Smother‘. She learnt the words and sang along. They fell apart not long after, this couple, for reasons the guy still doesn’t quite understand. He’s unlikely to be the last. Ever since their 2010 Demos Daughter have been making music to break up to, and debut album If You Leave is pretty much The Ring for full-blown emotional collapse: just one listen and Tonra comes crawling from the well in your direction, broken dreams and anti-depressants falling in her wake.

To be clear, this isn’t date music, dinner music or music for a lengthy car journey with anyone you care about, although it might form part of the solution for our rising birthrate. “I sometimes wish I’d stayed inside my mother/never to come out” sings Tonra on ‘Smother’: just try getting amorous after lines like that. Perhaps we should have it played in schools. But hey, relationships are overrated, and frankly were I forced to choose between a partner or these songs I’d take the songs. That’s not even an exaggeration.

Not since Portishead’s Dummy has heartbreak been so unswervingly depicted nor so compellingly rendered: If You Leave might be suffocating, but there’s a euphoria in going under. Mostly that’s because Tonra’s misery sounds so much better than the rest of ours, a masochism of reverbed guitars and layered voices, frantic percussion and striking production that puts our own Kleenexed sobbing and angry ice-cream consumption to shame. If You Leave might be thematically one-note but musically it’s disarmingly rich, and far more kinetic than an album that opens with the lines “Drifting apart like two sheets of ice my love/Frozen hearts growing colder with darkness” has any real right to be. Drummer Remi Aguilella earns much of the credit there, lending these wrenching narratives a vigour and force that mirrors their lyrical intensity, rising and receding like an erratic heartbeat.

By contrast Igor Haefeli’s guitar lines are spare and understated and fittingly fragile, often fraying at the edges to echo and static. It’s a combination that’s both muscular and introvert, the arrangements at once low key and very, very heavy: ‘Touch’ sets subtle synths against chiming notes and artillery beats, Tonra’s “dreaming of strangers kissing me in the night just so I, just so I can feel something” a disturbed counterpoint to the striking interplay of melodies behind.

There’s hints of The XX here, in the paring back and the emphasis upon atmospherics, and in a nauseous moment a friend dared to suggest Florence as a reference point for the vocals. Sure, they share a dexterity of voice, but Florence’s carnival has nothing on the worn desiccation of these songs – songs which simultaneously exhaust and elate, a dark night of the soul drawn out across ten tracks and sustained with total conviction.

There are few artists that could sing of beach holidays with the menacing portent of ‘Tomorrow’, nor hold our attention across forty five minutes of the kind of melodrama mostly found in the diaries of sixth-formers: by rights lines such as “Love hunt me down/I can’t stand to be so dead behind the eyes” should be winning Chortle awards, yet here they don’t seem in the least bit insincere. After a while they don’t even seem bleak, either, our acclimatisation to Daughter’s ashen environs an unnervingly swift process. Truth is, this isn’t a difficult album at all: If You Leave is staggeringly beautiful from beginning to close, a catharsis that’s both bracing and woozily amniotic.

Picking out high points is pointless: it’s the whole damn album, from beginning to close, and there is quite genuinely not a weak moment. And besides, there’s a character arc here: by the penultimate ‘Amsterdam’ Tonra is at least conceding that there might be an issue. “I’ve been thinking that I should see someone/Just to find out if I’m alright” she sings, and it’s difficult not to cry out in agreement. Secretly though we’d best hope she doesn’t: no artist was ever improved by “getting better”, and Daughter are simply too good to run the risk of them tainting their sound with happiness. We all heard what happened to Death Cab.