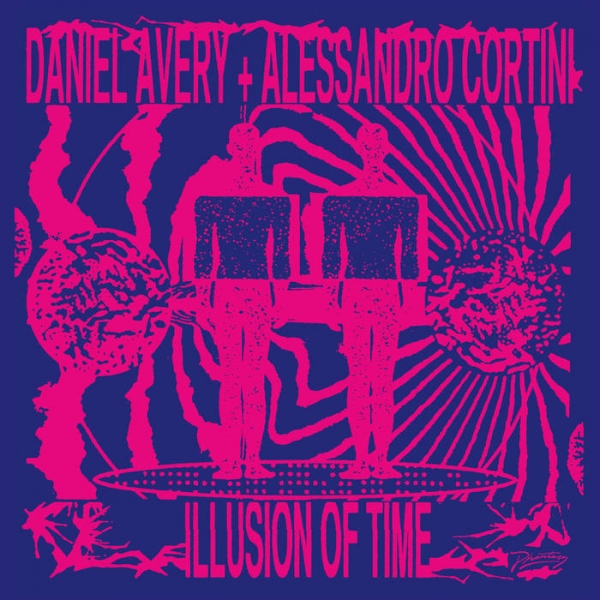 Illusion of Time is a dense album. It’s an album packed with sounds and ideas fighting for the forefront. It’s an album which sees Daniel Avery and Alessandro Cortini engage in atmospherics as they never have before and it’s an album that ultimately refuses to unify its meaning. It’s also one of the most immediately intriguing ambient release of the year so far.

To dip briefly into the history of the collaboration, the album follows the duos prior collaboration on 2017’s 7” release "Sun Draw Water". Since this, both Avery and Cortini have toured alongside one another whilst working on a record which “explores their shared love of industrial drones and expansive electronics”. The result is Illusion of Time.

It’s an impressive listen; merging Avery’s ornate synthetic melodies with the all consuming ominousness of Cortini’s solo work. This is music as appropriate for easy listening as it would be for scoring some neo-futuristic dystopian epic. Moment to moment, Illusion of Time is oppressive, unforgiving and beautiful.

Simultaneously though, it’s filled with these gorgeous moments of musical clarity. Take the eponymous track for example; a graceful piece which sees the same rolling synth melody swirl nimbly around an all-consuming sub bass. Penultimate track "Water" also deserves recognition as it’s one of the widest and most beautiful ambient pieces I’ve ever heard. Final track "Stills" similarly builds to a mesmeric wave of sound that rivals even the THX sound system test.

What I want to get across is that there’s a great deal of heart to this record, and even more that’s worth showing up for. There is however, a problem. As I stated before, Illusion of Time is a dense album and this is both its greatest strength and most significant weakness.

Each and every track here is in some way worthy of remark and sees the duo explore their combined sound in different ways, it’s just that there is little to no consistency throughout. Avery and Cortini have been working on this project for several years and unfortunately, it does show. As beautiful as the aforementioned songs are, they come out of nowhere and detract from the song that preceded it.

Tracks "Space Channel" and "Interrupted By The Cloud of Light" are the worst offenders as although they are pleasant, they end as soon as they’ve begun and offer little for the listener to grapple with before dovetailing into another contrasting musical idea.

On one hand, Avery and Cortini have seamlessly amalgamated their contrasting musical sensibilities to create some truly awe-inspiring ambient music here. On the other, it’s disjointed. In its failure to pin itself down, Illusion of Time can sound more like a proof-of-concept piece than a fully-fledged album. However, if you can reconcile yourself to this fact, there’s some truly outstanding ambience to be experienced here.