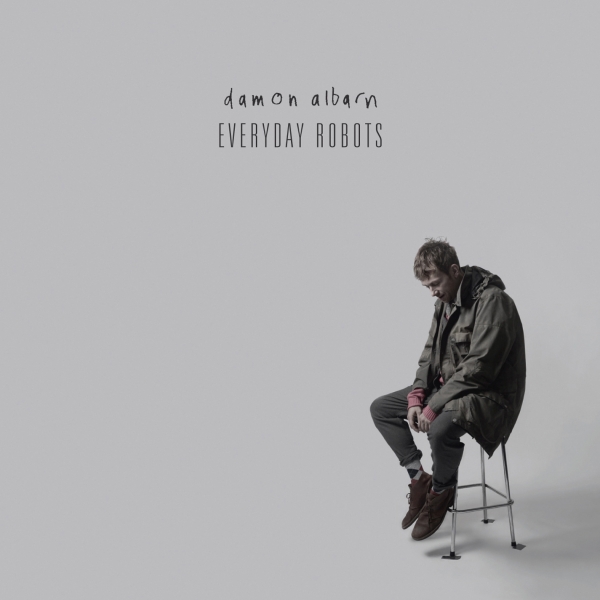 Four years ago, Damon Albarn was pacing the Pyramid Stage at Glastonbury, trying desperately to forewarn us of the polyethylene apocalypse. Frustrated, he implored the crowd to sing along to “Pirate Jet”, a Gorillaz song about industrial gluttony. Few did. They were much more obliging when, on that very same stage the previous year, Albarn had sweated and bawled his way through the Blur reunion. There was a lesson to be learned: give the people a cartoon that critiques overfishing and they lose interest; give them a bloke in a Fred Perry top who sings about driving to Primrose Hill and they’ll follow him to the ends of the Earth.

Everyday Robots manages to combine these two voices: the restless romantic that foretold a polluted techno-dystopia, and the maudlin bard of Th-fronting Estuary English. It’s the first record in Albarn’s 25 year career that dares to call itself a solo album, and one that draws together his ideals into a mercifully magnificent chronicle of estrangement and melancholy.

Over a solitary and sharply drawn violin loop, the eponymous opener is a depiction of lifeless beings that “just touch thumbs… stricken in a status sea.” With sinewy strings trembling on the verge of consummation, it recalls the bittersweet sadness of Aidan Moffat and Malcolm Middleton’s Arab Strap, in tone if not in scatological subject matter. “Hostiles” is a chilling serenade of tinkling keys, light throbbing synths and harmonic vocal cushions that sees Albarn deliver in understated fashion some of the record’s most breathtaking lines: “When your body aches from the unsolved dreams you keep, and the hours pass by, just left on repeat/It’ll be a silent day I share with you, fighting off the hostiles with whom we collude.” Everyday Robots portrays something above and beyond a dependence on computers and mobile phones. There is a real sentiment of alienation, of souls irredeemably isolated by their proximity in the most extra-terrestrial sense: on the smouldering phantom opera of “The Selfish Giant”, Albarn perceives that “every atom falling in the universe is passing through our lives.” He treats it all with a reverent curiosity, illuminating the most staid of scenes with habitual pathos. On the ambitious seven minute “You & Me” he confides to us: “Some days I look at the morning, trying to work out how I got here.”

Ever the collaborator, Albarn invites the dusky lilt of Natasha Khan (AKA Bat For Lashes) to shadow his vocals on “The Selfish Giant”, while fellow Africa Express polymath Brian Eno croons the baritone lullaby of album closer “Heavy Seas of Love” and adds quietly astral synths to “You & Me”. It’s interesting that working so closely alongside XL’s Richard Russell - with whom he produced Bobby Womack’s The Bravest Man in the Universe - would result in what Albarn has called his “most personal record yet”. He chalks this up to Russell’s supervision: “a book in any form needs an editor,” he explained. ‘Hollow Ponds’ plays like a photo album, turning over sepia-tinted images of the 1976 heat wave and his encounter in 1993 with the graffiti that would give its name to Blur’s Modern Life Is Rubbish. Even the zoological whimsy of “Mr Tembo” has its autobiographical roots, inspired by a baby elephant and initially composed for Albarn’s daughter. Amidst the buoyant ukulele shuffle with its subdued breakdown, muted telecaster riff and the jubilant Leytonstone City Mission Choir, Albarn still finds time to enumerate the strange ephemera of bourgeois life: “Logistics, haulage, golf, bungalows, spires, canals, cows, hay bales.” Asked what the elephant itself thought of the song when it heard it played, Albarn told an interviewer that it promptly “shat itself”.

Poetics aside, Everyday Robots is an album of very carefully orchestrated chaos, a live congress of organic and synthetic textures; the instrumentation seems at once to be incidental and micro-managed, carefully situated in its utter formlessness. Nothing illustrates this better than the self-declared arrhythmic clutter of “Lonely Press Play”, opening on a guttural bassline and then assembling itself over distant shimmering keystrokes, cascading and sliding percussion, and the sound of cassette players closing- the comforting familiarity of analogue “antidotes.” “You & Me” hangs from a steel pan loop that is a sharp contrast to the shapeless lament of the backing vocal. The second of two intervals, “Seven High” is all ponderous chimes and hollow, self-effacing guitar. As before, there is always something decidedly uncanny lurking at the periphery, just out of reach; “Photographs (You Are Taking Now)” maintains a guardedness before slipping into 8-bit fuzz, an anxious telephone ringing behind reflective lyrics about snorting cocaine.

In an interview this year, Albarn referred to Modern Life Is Rubbish as a “prophetic vision” of the near future. He admitted that “Everyday Robots”, like the sophomore Blur album, was written on the back of a Jean Baudrillard-style journey to the States to witness the sublime nihilism of Western society. “Driving in adjacent cars”, expending our lives in traffic jams on the way to LAX; joggers going round and round and round unto death. In revisiting these sentiments, Albarn has fine-tuned some of the extraneous elements of previous ventures. After the cool reception afforded to last year’s Rocket Juice and the Moon, Everyday Robots is his redemption of sorts, a just reward for a career’s worth of implacable curiosity and studiousness. Modern life might still be rubbish, but it is rarely shown to be so beguilingly beautiful.