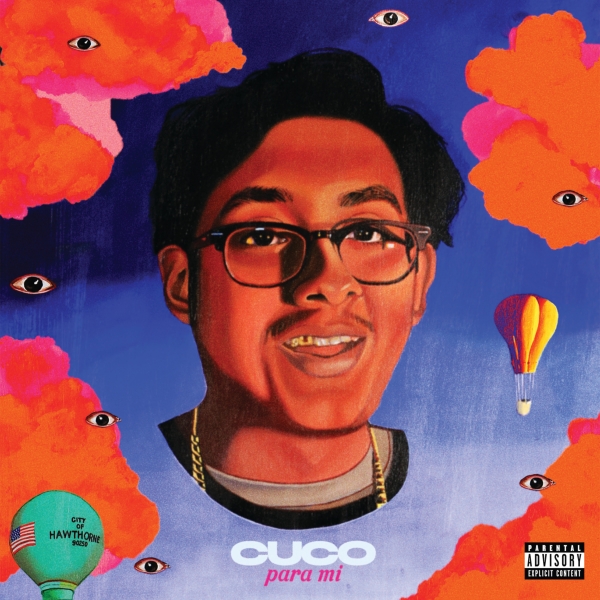 Cuco is in love with being in love; it is the brightest star in his galaxy, around which his entire musical identity is in orbit.

He falls - like we all do, for the first time - in and out of love with whiplash-inducing force, tangled up in a trap of love and hate without being sure of the difference. Omar Banos’ ideas of love, therefore, were bound to be lofty - his emergence in 2016, with the release of his mixtape Wannabewithu, was founded upon it. His lovelorn ballads, sprinkled with synth and psychedelia, are what we scrawled in mad passions as teenagers in our diaries, blushingly shoving our innermost feelings to the bottom of a sock drawer.

Unlike poster-boys of the past, rather than being reared under the hothouse lights of the ‘star-factory’, Cuco marks the rise of a new strain of artist: self-taught, self-producing and bred on the creatively fertile ground of the internet. While he belongs to the vanguard of bedroom pop artists in the league of Billie Eilish and Clairo, all reaching meteoric heights from viral videos, Cuco is far more than that: as a self-identified first-generation Chicano artist, he wears his heart masted to his sleeve in both English and Spanish. He is the catalyst of Latinx music breaking into the mainstream: a promise of attainable success for kids from similarly marginalised surroundings. Perhaps for the first time, Latina girls have found a heartthrob in the nerdy, non-threatening 21-year-old – someone whose songs they can sway to in Spanglish.

Para Mi is Cuco’s long-awaited debut album, after a smattering of mixtapes and EPs that have established his sonic signature. Translating to “For Me”, Banos explains, “Para Mi represents everything I’ve learned so far - but grown up and matured [… It’s] the full picture of me as an artist and where I am today creatively.” The title is fitting: a reclamation of his music as a teenager who went to a gig one day, and never came home.

While Para Mi fills the Cuco remit of synth-drenched relational eulogies, it fails to fulfil the experimentation Banos promised. He has at his fingertips a wealth of influences he can draw on: the rock en español and Spanish-language bolero music from his parents; the Chicano rap bequeathed from his uncles; the psychedelic rock and trap music of his high school friends – and yet, he seems to bypass their most rewarding aspects on the album. “Best Friend” is an exception: a playful concoction of infectious bossa nova instrumentation, switching up the tempo with hip-hop beats. The droll, stunted synth-riff in the third act - in place of where a guitar would lie if this was an infinitely less interesting track – is reminiscent of the kind of humour Cuco showed he was capable of in last year’s deliciously witty “CR-V”.

Para Mi is treated to an array of interludes and instrumentals which display the ambition that the other tracks should have shared. You can’t help but wonder what the galactical “Perihelion” might have been, or “Room Tone”, if they were developed as more than a zany intermission. The shimmering synth across the album might entice the ear, but it’s nothing more than window-dressing; though plain-sailing, it doesn’t indicate any decisive growth. “Para Mi” it most certainly is – with very few collaborations of any real substance. However, hip-hop newcomer Jean Carter is an absolute god-send, injecting some much-needed vibrancy and texture.

While Cuco’s music thus far has been an exploration of the good and the bad when it comes to matters of the heart, Para Mi is quite dark. The undeniable jewel in the crown of this album, “Bossa No Sé” - a contagious, trap-infused track with deceivingly bubblegum-sweet overtones – barely conceals the underlying heartbreak. “I’m pretty sure I hate you / I’m pretty sure I love you” he laments, tussling with the contradictions of a fraying relationship. After he and his band were involved in a serious car accident that prompted him to cancel the remainder of his 2018 tour dates, and a speculated break-up from his girlfriend, the pervasive sadness of the album is simply a reflection of saudade – or, “the love that remains”. “Hydrocodone” - its namesake a painkiller for severe pain – was finished post-surgery after the accident. “Wish you would say / Baby, I love you / 'Til I die / But my hopes are gone,” he mourns.

The tone of the album is almost suffocating. Just as Cuco’s vocals submerge under the cloying, bolero sensibilities of “Far Away From Home” – as do we, with this all-encompassing misery. Gone is the starry-eyed Cuco of old, light with the thrill of falling in love; instead we stand back, as he is incensed with anger (“Stupid bitch you came from hell and made me lose my fucking mind”), and the next moment crying out in self-pity (“I’ll take the blame it’s on me/ You were my little shawty / And I’ve been one big dummy”). Perhaps, this time, Cuco has taken things one step too far in the way of playground melodrama. There are no good times left: only tear-stained cheeks, sleepless nights and futile apologies.