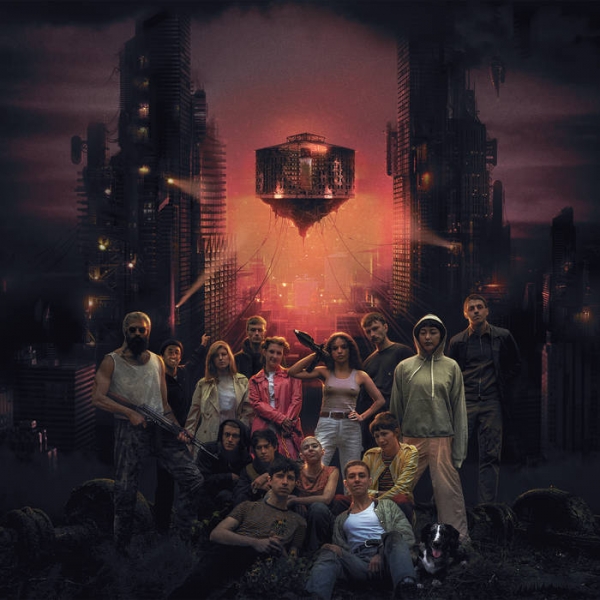 In the midst of an opioid crisis in Canada, one arts collective are saving each other through the power of music.

Living together in Vancouver, the many members that make up Crack Cloud have formed a creative community that helps fight drug addiction and aids recovery. Using art, music, and film as a form of therapy, they have now produced their first full-length album. Pain Olympics transforms their own past personal struggles into a unifying fight for hope of a better future.

Naturally, the sound of Crack Cloud is multi-faceted and eclectic, with many voices and influences coming together led by frontman/drummer Zach Choy. Lead single “The Next Fix (A Safe Space)” is aggressively funky - fast-paced in places like a racing heartbeat, Choy raps atop an infectious beat, while in other parts the choral voices of the collective offer a sense of salvation and safety. Each music video for this album is also a self-produced masterpiece, created within the community to provide an all-knowing eye into the struggles of addicts and the derelict spaces they inhabit, within a city where thousands live on the streets. Yet the feeling that this track and video leave you with is one of hope. In coming together this group emanates positivity and unity, and that feeling radiates through all the darkness on the album.

Like the group itself, many tracks on Pain Olympics have an ever-changing identity. “Post Truth (Birth of a Nation)” is chaotic and powerfully punky, travelling through an array or noises and genres to eventually become light and soothing, angelically pronouncing “We are all post truth”. “Bastard Basket” freely displays jazz influences, while on “Something’s Gotta Give” a dark and threatening sense of tension is building. It’s an obvious observation that these tracks reproduce the ups and downs of drug use, as well as the overwhelming sensations of pain, fear, and instability that can come through recovery. But for the millions out there facing the same options as the members of Crack Cloud, they give a drive for optimism and resilience.

“Ouster Stew” is another single with another different sound, and with another cinematic triumph accompanying it. Like a tribal version of '80s new-wave, it draws comparisons to Talking Heads, but less structured and more anarchic. The video sees two bohemian armies at war on a dystopian wasteland, alternating between violence and dance routines while Choy madly thrashes a shining white drum kit on top of a burnt out caravan. Crack Cloud are an impossibly creative and talented bunch of people, utilising the personal and painful moments of their own trauma to produce music that’s immersive and universal.

The album ends with the infinitely atmospheric “Angel Dust (Eternal Peace)”, which suggests the tragedy of death as a form of ascension. A spoken-word passage forms the personal sense of closure to the struggles of an addict, while the music takes you gently away. Raw, and real, and often emotional, Pain Olympics is a turbulent journey through the world of this community, proving in itself to be a successful outlet for those creating it, while also offering solace and alliance for those that need it.