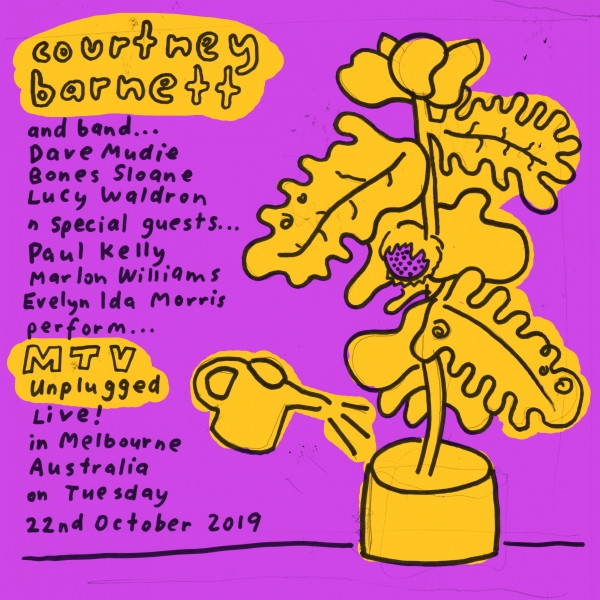 With her deadpan delivery and dry witticisms, Courtney Barnett is one of the best lyricists in music today.

Ranging from offbeat, often sardonic observational humour to anxious, much-too-self-aware self-reflection, Barnett’s songwriting talent - not to mention her prowess as a guitarist - is effortlessly cool. It seemed only a natural course of action for her to do live session for MTV Unplugged in her hometown of Melbourne: a stripped-back set some way from her guitar-heavy regular set, and a chance for her to truly showcase her excellent lyrics.

Performed on 22 October, 2019, Barnett invites a slew of guests to the stage, including songwrtiter Paul Kelly, Marlon Williams and Milk! Records colleague, Evelyn Ida Morris. She starts the set with a rendition of her hit “Depreston” - a melancholic ode to house-hunting in the suburbs - which is already a mellow track. This live version, though, highlight’s the subtleties in Barnett’s voice, the scratchiness in her drawl, the rawness of the count-in. Tracks like “Sunday roast” and “Avant Gardener” are familiar (“the paramedic thinks I’m clever ‘cause I play guitar, I think she’s clever ‘cause she stops people dying” is among the finest lines of the decade), but again, the rawness only adds to the emotion of her delivery, even with the odd chuckle here and there. Her new song - “Untitled”, for now - follows the lead of 2018 album Tell Me How You Really Feel, that channels her inner anxiety and constant existentialism. She is join by Morris on the stage for “Nameless Faceless”, which gets a completely different piano arrangement that gives it a more sinister, haunting, ominous feel.

The highlight of the set, though, is Barnett’s cover of Leonard Cohen’s classic “So Long, Marianne”, dedicated to Cohen’s muse Marianne Ihlen, who died in 2016. He himself passed away three months later, and you feel the weight of the song in Barnett’s delivery. She strains sometimes, her voice cracking as she hits the notes low and high, but it only serves to make it feel even more real.