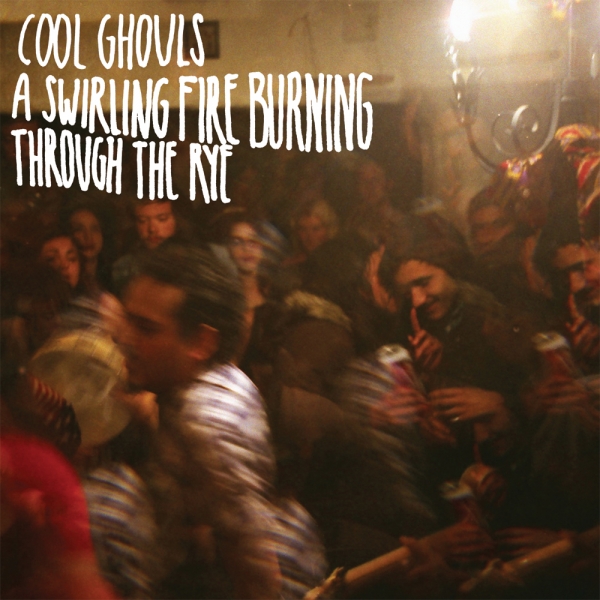 For Cool Ghouls’ early PR material to insist in no uncertain terms that they are “not a retro act” would suggest that to make those comparisons would be profane. Maybe “retro” is a dirty word, one that robs a group of its ingenuity and consigns it to predictable algebraic equations of musical family histories. The Fresh & Onlys’ Nick Cohen (who mixed the first Cool Ghouls LP last year) seemed to think so, positioning them instead alongside his own band and other contemporary Cali-bred psych-rockers, or conceding more left-field comparisons with The Troggs. Unfortunately for Nick, Cool Ghouls have produced a second record with so many nods to their garage and psych forebears (and some more unlikely relatives along the way) that A Swirling Fire Burning Through The Rye would suffer whiplash just trying to acknowledge them all. Fortunately for him, it’s not all that much of a bad thing.

If you're going to be assailed with heinous accusations of being a retro act then it's best to meet those labels head-on, and Cool Ghouls clearly feel no shame in parading their influences straight off the bat. Their throwback three-part harmonies take centre stage on jangly summertime opener "And It Grows" as they tell a benign sun-dappled story of "fruit up in the trees/And the grass up to your knees" and bison grazing on the plains that feels about as cutting-edge as bell bottoms and invasions of Cuba. Slow-burning successor "The Mile" observes a cartoonish street scene painted with drawled vocals, methodical bass and stuttered-echo guitar breakdowns.

If not soulless, the record is rather lyrically fallow, lacking the suitably colourful wit necessary to tease out any memorable or coherent sense of personality. That said, the music is the narrative here, and that narrative is an evocatively soulless picaresque of suburban Bay Area hedonism where the only imperatives of Side A closer "Insight" are making it to the show on time and drinking if you want to get drunk. "What A Dream I Had" is the perfect example of a track neither coming nor going, its languorous verses swaying indistinctly back and forth in time with the melody before bowing out to make way for a shredding solo that is itself subsumed by a whimsically upbeat outro.

It would be a shame if one were to neglect the obvious instances of retro veneration with which Cool Ghouls have punctuated their music, because they serve as beacons to demonstrate to their compatriots exactly how you go about paying homage to some landmark sounds. "Orange Light" is brimming with zombified Rubber Soul insouciance, "Reelin'" comes in like a misanthropic offcut from Mr. Tambourine Man and if Brian Wilson weren't busy lending his endorsement to misguided BBC covers, he might sit up and listen to some of the harmonies and mellow surf vibes at work in the latter stages of the record and wonder if his legacy isn't being better honoured in sweaty San Francisco house parties. Other hat-tips are more unexpected; for the engrossing first 30 seconds of looped bass notes on “Get A Feelin’” you’d be forgiven for anticipating the growl of Jim Morrison, while the thumping percussive interludes of “Insight” shelter a saxophone redolent of a Roxy Music eccentricity. Having conducted a number of live peformances backed by a three-piece horn section, putting them to use on any further recordings can only be a good thing.

A Swirling Fire Burning Through The Rye is a kind of master key to a variety of musical boxes both present and past. Never as heavy as Ty Segall’s Monster or as dense as Tame Impala, and perhaps without the intelligence or charisma of The Fresh & Onlys, Cool Ghouls have presented a laudable work of psych-rock with garage and country inflections. It won't blow open the current pantheon, but it will remind listeners of exactly why some of this music is worth risking the accusations of being (whisper it) retro.