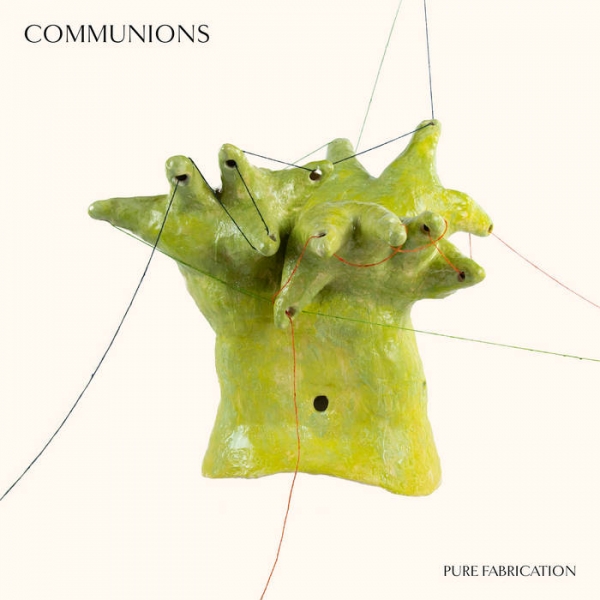 It’s not easy to find your own voice. Native to the Copenhagen underground scene that spawned Iceage and Vår, Communions went down a path paved mostly by britpop and indie rock. They proudly wore their influences on their sleeve on the debut outing Blue, and continue likewise on the sophomore Pure Fabrication.

Brothers Mads and Martin Rehof spent their childhood in Seattle, USA, then moved back to Denmark in the midst of their formative years. With inspirations largely east of the Atlantic, Communions present Pure Fabrication as a study on identity, freedom, and fate. After all, having two homes as far apart culturally as they are geographically is liable to leave marks on one's very sense of self.

Pure Fabrication can be summed up as consisting of britpop's euphoria laced with self-loathing, indie rock's edge, and almost imperceptible Scandinavian estrangement. While the end product doesn't sound particularly revolutionary, it is genuinely enjoyable and relatable. Every track carries a hint of The Stone Roses, The Strokes, Oasis, or Suede, but never crosses into rip-off territory. Even the song "Learn To Pray" that Harry Koisser from Peace could have authored sounds endearing in its familiarity rather than like a hard facsimile.

Grandiose opener “Bird of Passage” is befittnig the third act of a coming-of-age movie. All the soul-searching finally paying off and the protagonist, high on their newfound liberation, drives off into the sunset. It takes a few songs down the LP to detect intense feelings of insecurity that lurk beneath the surface of what first seemed like a feel-good anthem. The chorus “I am nature’s bird of passage / I don’t remember / Who I really am” is rooted not in empowerment but in confusion. The protagonist's journey of self-discovery just begins. Though interesting to follow, it could have been completed in ten tracks instead of fifteen, but at least it provides a sense of adventure to those of us who have been stuck in our homes and our heads for a year.

There's something magnetic about Pure Fabrication. Even in its darker moments, it spouts warm feelings of bittersweet nostalgia - properly reminiscent of what it's like to be young and dramatic. Every emotion feeling everlasting, every discovery life-changing. "Like jesters on a tightrope / We stride to our disasters," Martin declares, a description that fits almost anyone who ever was nineteen.

Pure Fabrication is an hour-long identity crisis. In the span of several songs, the narrator demotes himself from "a born prince" to "nature’s paradox" to "a lonely one-man choir". In this context, the sources of Communions’ musical inspiration are completely justifiable. The closing track "The Gift of Music" leaves an important question: aren't we all just a sum of our influences?