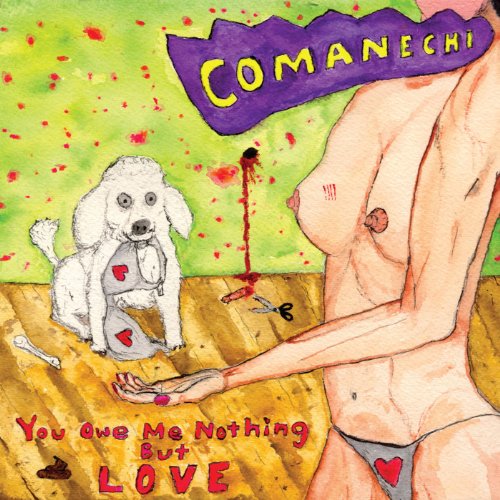 Everyone loves a good freakout. Rock’n’roll’s tendency towards a certain type of pockmarked Hollywood camp means there are rich pickings to be found amidst its various asylums, although with certain notable exceptions, it’s often hard to distinguish between the actors and the genuinely unhinged. But that’s half the fun – horrendous voyeur that it is, rock history lauds and venerates the eccentric, the lunatic and the just-plain-out-of-control; perpetuating the myth that the music thrives on its medium being absolutely, irredeemably, brainfartingly, unf*ckingforgettably doolally.

So it’s won’t come as a surprise for seasoned listeners to hear Akiko Matsuura yelling “I’m losing my mind” over a sludged-out maelstrom of rough’n’tumble riffage – the script’s been written and frankly we expect everyone to follow it. As with most of the rock bands of our age, Comanechi always sound slightly too au fait with the plot to be truly out of their minds – the hooks too familiar, the angst too knowing. The reference points come thick and fast: blink and you might miss the flashes of Sonic Youth homage amidst nods to Mudhoney, Bikini Kill, Babes In Toyland, The Melvins and plenty more. Riot grrrl and grunge are the main sources of inspiration, and although they miss the pointed politicism of the former and the latter’s navel-gazing faux-nihilism, they nail the sounds pretty darn well.

And it’s all good. The pop-metal lurch of ‘Out of My Mind’ seethes magnificently, and ‘Mad’ comes with an imaginary Kathleen Hanna floating over its shoulder, guiding and instructing as only a furious projection of righteous femmepunk possibly can. Just like the yawningly-obvious majority of pop music before it, the main theme of the record is love (it’s released on Valentine’s Day, romance fans!), but with emphasis on its destructive elements rather than chocolates, heartbreak or eternity. As a study in human relations and their subsequent negativity, You Owe Me Nothing But Love comes across as less of a deconstructive psychological thesis and more of a disillusioned rant… or at least it does until ‘Patsy’, the album’s thrilling centrepiece. It’s the one moment where they create something truly unsettling – the sexualised horror of the lyrics (“Hi, I’m Patsy/I show my pussy to everyone/My brother fucked me/He’s a model”) is conveyed somewhere between a venomous growl and devilish insouciance, amplifying the tension spiked by Simon Petrovitch’s maraudering chords. The song’s main character comes across as a confused mess of victimhood, tragedy and indifference, veering from apparent accusations of incest to nonchalant claims like “I’m not into fashion/I’m into punk” before the previous lines have time to sink in. As the one moment where the raucous ambitions of the music truly come up against a more sincere depiction of mental instability – realistic and frightening, rather than fun and heroic – it makes for a difficult listen, but a compelling one nonetheless.

Comanechi’s second full-length ain’t a gnarly classic to file alongside Fun House or Philosophy Of The World (to name but two genuinely batshit contenders of yore), but it’s as raw and savage as hook-laden guitar music gets in 2013. We’re all a little too savvy to truly believe in the rock’n’roll woah these days, let alone fully commit to its glorious farce, so it’s a struggle to be convinced when yet another gang of skinny kids with guitars tell us they’re crazy. But playing along with the charade’s a lot more fun with songs like these.