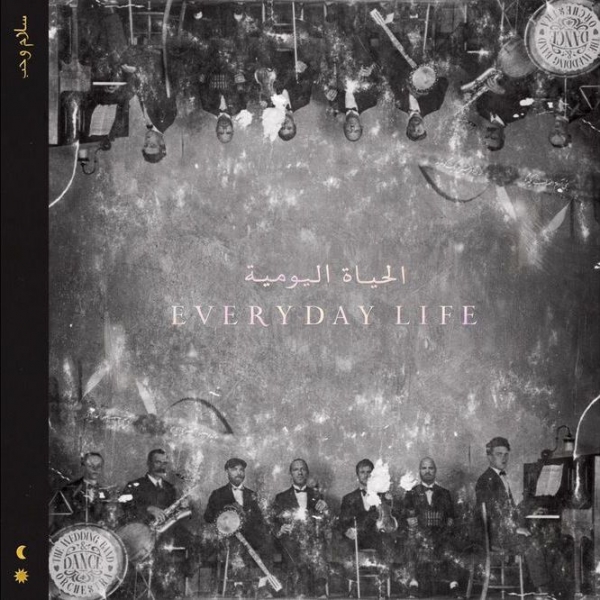 On an expansive, emotional, epic gauntlet, Coldplay are a far cry from the band who rang in this decade, and they’re all the better for it.

The name Coldplay has become synonymous with a push and pull dichotomy. Over their extensive, and let's be frank, impressive career where they've gone from sad college boys to multi-Glastonbury headliners who can take any stadium and sell it out; the road travelled has been one rife with critique.

Eight years ago Coldplay became a band completely entrenched in constructing an immovable fortress of mainstream choruses, after making their name as indie everymen. They started this decade with a bold move into a bombastic idea runway; filled with bright colours and Beyoncé guest spots.

And they're ending it with a cinematic sonic scape that pitches everything from driven folk, gospel, wild jazz sax solos, and indie sincerity. Split into two parts, Sunrise and Sunset; Everyday Life is as much a concept about the complex natures of humanity as it is a way for Coldplay to delve into their reserved pulse.

Even for a band that have held emotional substance heart-on-sleeve, opening the Sunrise half of the album with a poignant string arrangement is a bit 'on the nose'. Still, given that what it opens is the gates to a sprawling cinematic adventure, it does feel somewhat fitting.

"Church" is where the pulse quickens and undulating synths creep upward, it all feels like the world waking, and this is ultimately the message that Everyday Life delivers. The pieces that make up the puzzle. The most explosive of which, "Arabesque" rife with horn-laden crescendos erupt with a rattling battalion of noise.

One of the most emotionally drawing moments; digging deep into the psyche of the trauma that can come from an absent parent, the dry, piano-led "Daddy", a ballad of a child yearning for its father.

And then they bust out "When I Need A Friend" which goes full choral, aided by atmospheric rain as the apt Sunrise closer. Given it's a two-act play, the end of the first half, while suited, seems a natural closer to the entire spectacle but kicking off round two, "Guns" is a fast-paced acoustic-driven folk number that has a heart of wide-eyed disbelief at the state of the world.

Sunset is where things fall to a quieter timbre, but the humanitarian exploration is far from flat. On "Champion Of The World"; a vast sounding, nineties drawn-out cut, Coldplay touches upon romance.

Rounding everything off, the titular closer holds a house of mirrors up to the life of both Chris Martin, Coldplay, and the world, and roots the subdued grandiosity of the seventeen tracks before it in a simple idea that asks the question - how? How do we survive as a species in a world we want to destroy, how do we love when we hurt, how do we see when the lights are off? Big questions after having gone through a previous seventeen tracks.

At times it can feel like the party's over, especially given the full focus Coldplay have had over the years on pivoting from euphoric BBC-sporting-moment-highlight instrumental from sad-boy piano indie. Still, if you can get over the fact that the cannon of coloured powder are nowhere to be seen, then the results are rewarding.

Coldplay are a band who explore. Be it the origins of their emotional landscape, or the shallow depths of the mainstream world or even the actual vibrancy; every effort has been made to create an audible spectacle. And gaze on as a band who've evolved into an unstoppable entity carry on their organic exploration.