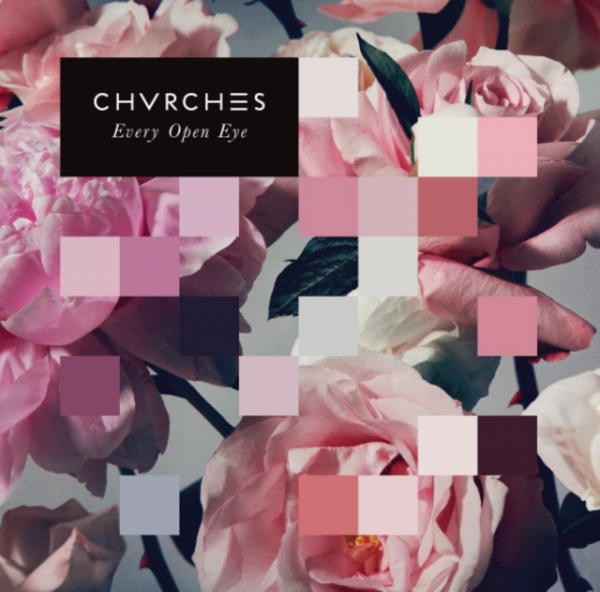 Chvrches are fast becoming a veritable ecclesiastical hit factory. Following a widely successful debut which yielded seven singles, their sustainable, hand-reared, synth-driven pop basslines are yet again riveted to the feisty cherubic vocals of frontwoman Lauren Mayberry, and Every Open Eye could prove to be part of another winning formula.

The album is frontloaded – much like The Bones Of What You Believe, with the bigger hitting single tracks - however, the chief references seek to differentiate themselves from their predecessor. “Never Ending Circles” emphasises “this time”, as the first three tracks dwell in the first person perspective. The notion “every human touch will be repaid” nods to those who have made the band thrive since the band’s formation. This is a band fed by an army of fanatical followers; as Mayberry herself wrote in her much-discussed Guardian article, Chvrches are “a band that was born on the internet”- a fact they own.

The humanistic “Make Them Gold” continues to affirm through inclusive lyrics a warm glow found through close bonds, “I will be with you in the fray with those second thoughts” and “we will take the best parts of ourselves / and make them gold”. This is a welcome U-turn, as the shiny metal was a bête noire in “By The Throat” where “all that’s golden / is never real”. Perhaps the opening track here truly sets out a schism in their ideology, as “at least this time I’m not so cold”.

The artwork for the new LP shows the relationship between the organic and the inorganic upon which the Scottish trio seem to enjoy riffing, both in, and outside their music. The natural beauty of the rose is partially pixilated. An ingenious billboard advert makes the concept tactile. The music lives within parallel boundaries. The binary synthesisers, modulators and loops build a framework for emphasising the humanity of the vocals. Among the bursting and popping cascades of constructed ones and zeroes, Mayberry funnels tripping, even-metered lyrics and soaring, imploring notes into the choruses. A preoccupation with bones, skin and veins is reminiscent of Beneath The Skin by Icelanders Of Monsters And Men, where they contrasted human traits with those of animals, with and for a similar effect. “Down Side Of Me” smacks of the Nordic quintet too.

For a band recognised for eighties vocal and electronic influences, the second half of this record seems to shimmy its way into the 1990s. This is perhaps an indication of 27-year old Mayberry’s formative years as she claims an increasingly growing share of the band. Although Lauren had been on the Glasgow music circuit for some time in her own right when Iain Cook approached her, Martin Doherty and he were a more experienced pair. The strong retro-feel of The Bones Of What You Believe reached beyond their slightly younger co-artist’s musical upbringing. Now for whatever reason, the dance-y disco-y pop of the nineties emerges. The latest single “Clearest Blue”, dare we say, sounds a little like “The Macarena” while Lene Marlin’s earworm “Sitting Down Here” resonates, especially when listening to “Empty Threat” . They are worryingly catchy.

Cook and Doherty’s arrangements have become understandably more complex. They have more toys in the toolbox and a greater sense of focus, (they were all working second jobs while self-producing the first album) now they have Every Open Eye on Chvrches as a viable unity.

They choose again to close their album with a downbeat, practically a capella (by their standards) flourish. “Afterglow” indicates a sense of confidence of ‘a good feeling remaining after a pleasurable or satisfying experience’. This is perhaps a presumption in terms of prospective reaction but seems like more of a reflection of their own enjoyment as they bond further as a unit after a gruelling touring schedule.

Two years to the week after their debut album was released, the follow-up is not noticeably dissimilar. This is a sign of a group that are confident in, and are reinforcing their sound. Every Open Eye is full of epic singles that reverberate dizzingly around the head. Versatile vocals layer nostalgic computerised patterns to produce high drama within tracks and between individual verses. However, to its detriment the new use of the plasticised sound of the nineties is frustrating as it smoothes out the gritty, edgier pillars of their church.