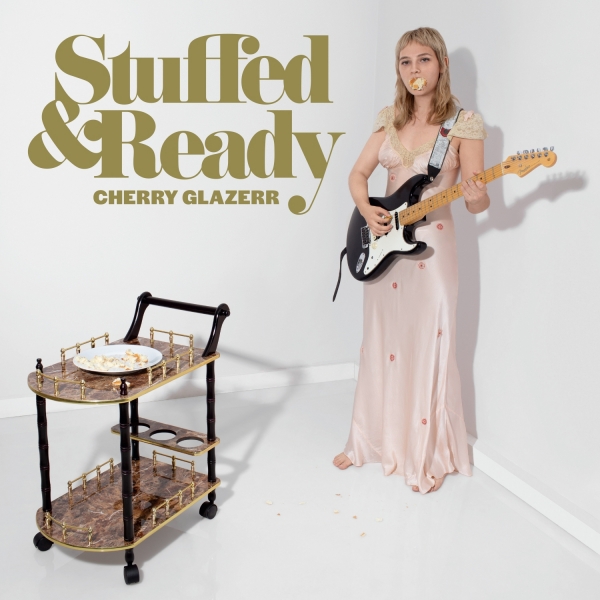 There’s a moment late in Stuffed & Ready, Cherry Glazerr’s splendid fourth album, where guitarist and vocalist Clementine Creevy does something never before heard on a CG song: she screams. “I see myself in you,” she shrieks, “and that’s why I fucking hate you”.

It’s as much a hair-raising moment as it is a signpost for the record as a whole. And while Stuffed & Ready shares the glossy sheen (thanks to Carlos de la Garza, who returns for a second go-round as producer) and excellent songwriting of its predecessor, 2017’s Apocalipstick, the former is darker and more insular both musically and lyrically. To wit: Creevy has traded Apocalipstick’s self-deprecation (“My room smells like an ashtray / Wearing a smile and a heart on my sleeve”) for Stuffed’s purposeful seclusion (“Smoking makes me taste like metal / To keep you away”). In other words, she’s gone from simply dancing alone to being in near-constant isolation. Throughout the 32-minute runtime, Creevy makes it clear something’s changed and that she feels alone as a result. So you get a song, fittingly enough, called “Isolation” where she states, “My isolation is simple and stupid as me”. Furthermore, she acknowledges the accompanying harm: “I hold my tongue so I don’t repeat myself / Instead I beat myself”.

And despite containing two of the heaviest songs in the band’s catalogue (“Ohio” and “Stupid Fish”), the record doesn’t spend its time solely traveling down dark alleyways. Spritely, genre-hopping rockers “Daddi” and “Wasted Nun,” for example, further explore the the second-class citizen reality of being a woman through Creevy’s biting satire. On the former she asks whom she’s allowed to have sex with using a prickly melody, while the latter appears to address slut-shaming and has one of her best vocals to date where her voice alternates between deadpan and soaring. Similarly, the propulsive and brilliant “That’s Not My Real Life” finds Creevy describing herself through the eyes of “the suits”—record company execs, perhaps?—as a person in misery “like a proper woman,” and a “naked tree” from which you can take leaves as you wish.

“With Stuffed & Ready, I’m a much more weary and perhaps a more cynical woman,” Creevy declares in the press release, “who believes you need to figure your own self out first.” This is certainly inarguable given the content, and is underscored by its bookending songs, “Ohio” and “Distressor”. One of the first things Creevy sings is, “I wish myself the best but I’m broken / The light inside my head went dead and I turned off”; a half hour later she notes, “I just wanna drown in my own noise / Beneath time, the only faces I can see / Are the faces I pushed away from me”. For all of Creevy’s talk of isolation and the time she spends alone, you have to wonder who she’s addressing, the listener or herself. That ambiguity in her writing may scan as lazy or vague initially, but as you explore Stuffed, you realize that perhaps she’s trying to be universally relatable – at least as much as an introvert can be.