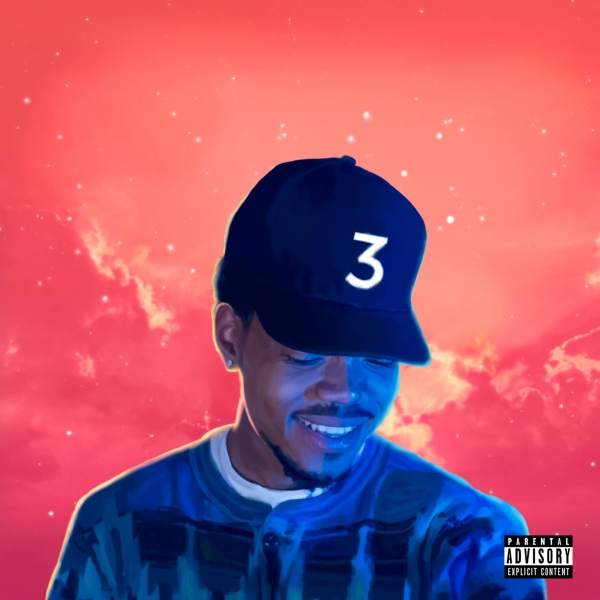 It’s difficult to overstate just how much has changed for Chance The Rapper since his 2013 breakthrough mixtape Acid Rap. He’s gone from a local legend to a national icon, collaborated with Kanye West, toured the world, and become a father, among plenty of other noteworthy feats. So if his third solo project, Coloring Book, is a bit less engaging than its predecessor, that’s only because Chance is truly happy and wants us all to share in his joy.

That difference is apparent right out of the gate. Where Acid Rap’s “Good Ass Intro” was a frenetic, jubilant declaration of talent arriving, “All We Got” is slower and more self-assured, balancing booming guttural strings and heavenly horns. West handles hook duties, but his presence is as much a status symbol as an actual musical contribution. West is obviously returning the favor for Chance’s stellar bars on The Life of Pablo’s “Ultralight Beam”, but given Chance’s Chicago heritage and idolization of West, his mere presence means more than his vocals. It’s an indication that Chance has reached the stratosphere of Chicago music, and he’s clearly glad to be there.

“Man I swear my life is perfect, I could merch it / If I die I’ll probably cry at my own service”, Chance spits on the opening verse, and you can hear the bliss ooze out of him in each bar.

“No Problem” sees Chance get a bit confrontational, but there’s still an audible grin on his face, thanks in part to ebullient production from Brasstracks and predictably fun verses from 2 Chainz and Lil Wayne. The song is pure chest thumping, but even Chance’s take on typical rap bravado sounds like something suitable for a Sunday service.

Nostalgia and Chance’s tumultuous upbringing were huge themes on Acid Rap that aren’t quite as present while he’s living in the moment on Coloring Book, but “Summer Friends” serves as a spiritual sequel to 2013’s “Paranoia” and delivers a poignant take on the rampant violence that sweeps Chicago in the summertime. The unorthodox pairing of Francis & the Lights and Jeremih blends perfectly, and the latter delivers a particularly arresting account of his own childhood in the Windy City.

Two recent developments of Chance’s do loom large over Coloring Book and keep it from reaching the same heights as Acid Rap: his penchant for singing and his status as a sort of hip-hop community organizer.  Chance is a perfectly fine singer, and his raspy voice certainly grows on you over the course of the record, but he’s a generational talent as an MC and someone capable of writing dense, cerebral rhymes that have listeners rewinding the moment they finish.

“Blessings”, the single he debuted on The Tonight Show, is a perfect example of just how good he is when he decides to rap. The track is a testament to the influence of God in Chance’s life (a very frequent theme on Coloring Book, which bears a far more noticeable gospel influence than Acid Rap), and features absolutely jaw-dropping lyricism.

“I’m at war with my wrongs, I’m writing four different songs / I never forced you to forfeit it, I’m a force to be reconciled / They want four minute songs / You need a four-hour praise dance performed every morn”, he spits effortlessly.

Unfortunately, he simply raps less on Coloring Book, a signal perhaps of his overall direction as a musician, which is hardly shocking given that artists like West are rapping less than ever these days. The record is also filled to the brim with high profile guests, including Young Thug, Justin Bieber, Future, Jay Electronica and T-Pain, and the ensemble cast doesn’t always mesh.

Sometimes it turns out well, like on Bieber collaboration “Juke Jam”, an endearing and vivid depiction of a young romance that revolved around the neighborhood roller rink. But on other songs the guests either don’t add much or are part of a cut that simply doesn’t fit. “How Great” would fare better as a Chance solo outing, although the dual religion perspective provided by Jay Electronica is beneficial for ideological reasons, while “Mixtape” sticks out like a sore thumb with its heavy trap underpinnings.

Many of Acid Rap’s best moments were when Chance had a track to himself and really had room to breathe as a lyricist (it’s also why he’s still finding his footing as a guest rapper). Those songs tended to be more introspective (“Acid Rain”, “Chain Smoker”, etc.) and gave listeners an unmatched look at the psyche of Chancelor Bennett as an adolescent on the verge of adulthood. On Coloring Book, exultant choirs and joyous praise of God replace those sullen moments of teenage soul-searching.

Chance is still just 23 years old, but Coloring Book is a staggeringly mature record, and while it isn’t on par with Acid Rap in terms of unforgettable lyricism, it also has a different mission. Acid Rap’s goal was to show the world who Chance The Rapper was, and now that we know him he wants nothing more than for us all to celebrate together.