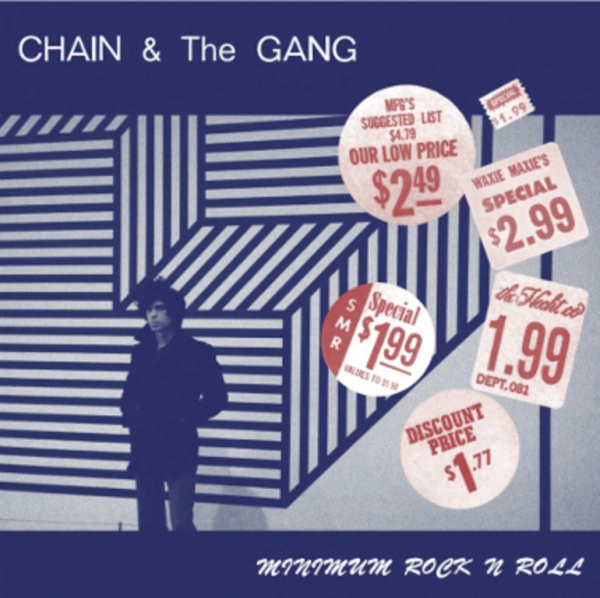 Ian Svenonius has been the saviour of rock n roll for over twenty five years now….when will anyone start listening to the man? The tousle-headed punk has been throwing slogans, political rhetoric, records, books and talk shows at us since he formed Nation of Ulysses back in 1988 with fellow DC heroes Steve Kroner, Steve Gamboa, James Canty and Tim Green before going to form The Make-Up, Weird War and, finally, Chain and the Gang. Some might argue there’s been diminishing returns as the years have rolled on, and while there’s some truth in that you’d really have to go a long, long way to better albums like 13-Point Program to Destroy America or Destination: Love – Live! At Cold Rice for Marxist agit-prop gospel rock ‘n’ roll.

Chain & The Gang have been on the go since 2009 and Minimum Rock N Roll (Svenonius is forever the wry wag) is the band’s fourth, and probably best, album so far. Svenonius is Chain, while the main gang members include Katie Greer on vocals and Fiona Campbell on drums, and the sound is – as the album suggests – a sparer rock and roll than Nation of Ulysses yet still bringing elements of post punk, garage and blues in what the band term as “crime wave”. Sure, it’s not as thrilling or elemental as his earlier work, but Minimum Rock N Roll is a hell of a lot of fun.

“Devitalize” opens up the record and proves that Svenonius hasn’t lost any of his political edge; as he yelps “we got to devitalize the city!” and attacks the middle classes he’s only backed by a vicious squall of guitars and a primitive bass and drums backbeat. “Never Been Properly Loved” uses the same rhythm blueprint but Svenonius is joined by Greer’s alluringly bored drawl and a killer rock and roll chorus to give this track more of a verve than the opener, and the romantic theme is continued on the girl-group swoon of “I’m A Choice” which finds Chain in pleading-for-love mode. ‘Got To Have It Everyday’ is appropriately sleazy slo-mo garage (“I can get it from a tree/I can get it from a stone/It doesn’t matter to me”) and the album really hits its stride with the killer one-two crime-related combo of “Mum’s The Word” and “Crime Don’t Pay”; the former is an agitated ramalama of a song, the latter the best song on the album that vibes on a mid-tempo addictive riff and Campbell’s brilliant, instinctive drumming, as Svenonius and Greer trade lines about bank heists and jail breaks.

Minimum Rock N Roll kind of tails off from that point, but Svenonius on autopilot is often better than most bands will achieve in a career. However, it does lessen the impact that Chain & The Gang could have made with this album. It’s not going to rank alongside anything by Nation of Ulysses or The Make-Up, but it is the best album the still cool-as-fuck Svenonius has put his name to for a handful of years.