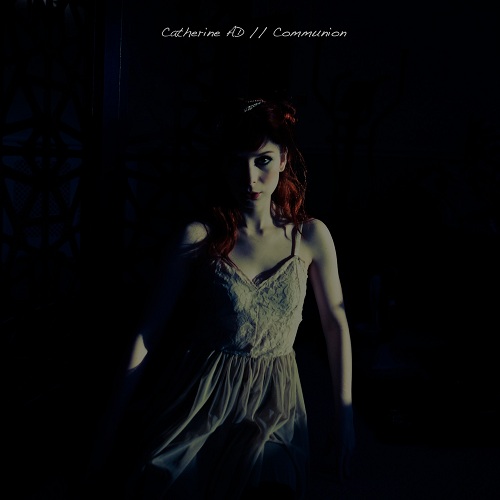 There has always been something knowingly superficial about Catherine Anne Davies. The fiery-haired Welsh pianist has cultivated so specific a persona that she alone carries the genre neologism “gothspel” and has made her name partly on a string-laden cover of Lady Gaga’s ‘Telephone’. Self-constrained to only piano, strings and vocals and recorded in a church in London’s Crouch End, it is no great surprise that her debut mini-album Communion is one of the most obviously contrived records of the year so far.

This takes nothing from Davies’ undeniable talents, however. Her seductive, black treacle voice may not be for everyone, but especially for a relative late starter her skills on the ivories are substantial. Piano is absolutely central to these seven songs, but strings are also integral to the dark and ominous glamour which unfolds over a slim twenty-five minutes. Limiting herself to such stark arrangements means Davies has bravely laid her songwriting bare – fortunately, but for a few distracting curses and the odd clumsy line this stands up well, too. The vaguely jaunty “The Heart Wants to Be a Hammer” is one highlight, and lyrically “Yeats Is On Mine” partly justifies Davies’ otherwise baffling claim to a Manic Street Preachers influence.

The inclusion of that ‘Telephone’ cover is more troublesome. Widely interpreted by live audiences as a joke, on record it feels less like the rescue of a good tune from pop excess and more like a slightly embarrassing confirmation of how shallow the song was in the first place.

Taken as first polished release by a still-developing talent, Communion is an intriguing listen rather than essential purchase. That said, there are enough hints of greatness here to suggest that if Davies frees herself of instrumental restrictions on her début full-length next year, what results might be something both more real and more compelling.