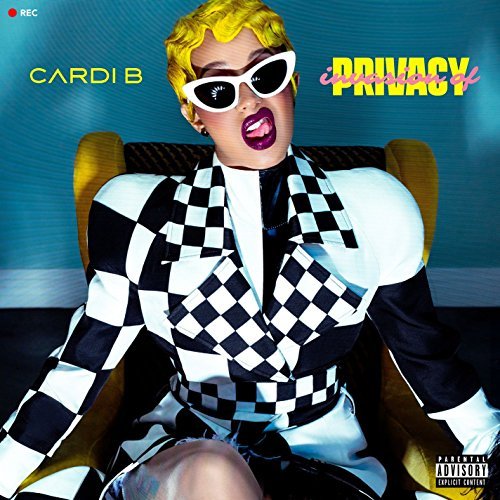 Cardi B blew up with her release of “Bodak Yellow” during the summer of 2017, becoming only the second female rapper to ever hit number one on the US Billboard Hot 100 charts.

Since then, the world has been excitedly awaiting her debut album, and Invasion of Privacy doest not disappoint. Cardi has become an icon in music, and the wider world. She’s confident, empowering and not afraid to be herself. In opening track “Get Up 10”, she raps, “Went from making tuna sandwiches to making the news / I started speaking my mind and tripled my views.” Her voice is a force to be reckoned with and she speaks her mind on every track on this album without being worried about the consequences.

“‘Cardi B is so problematic’ is the hashtag / I can’t believe they wanna see me lose that bad / ...I’m my own competition, I’m competing with myself”, she raps on “Best Life”. The song, which also features Chance The Rapper, is one of the tracks that truly stand out here; Cardi’s strong rap verses paired with Chance’s smoother choruses create a beautiful mixture of sounds.

“Be Careful” shows listeners another side of Cardi: one vulnerable and hurt. There’s speculation that this song is about issues between Cardi and her fiancé Offset. Regardless of whether it is or not, the lyrics are honest, open and relatable.

“I Like It”, featuring Bad Bunny and J Balvin, stands out for its Latin influences, offering a twist on Cardi’s hard hip hop sound. Similarly, “Ring”, which features Kehlani, and “Thru Your Phone” catches listeners’ attentions for the R&B elements they add to Invasion of Privacy. With the variety of sounds these songs bring to the album, it shows that Cardi isn’t afraid to take risks. With the success that “Bodak Yellow” brought her, this album could have been filled with 13 carbon copies. But it isn’t; instead, Invasion of Privacy is filled with carefully crafted tracks which ably show her many sides. Cardi B knows who she is and where she came from and she isn’t trying to hide it from anyone.