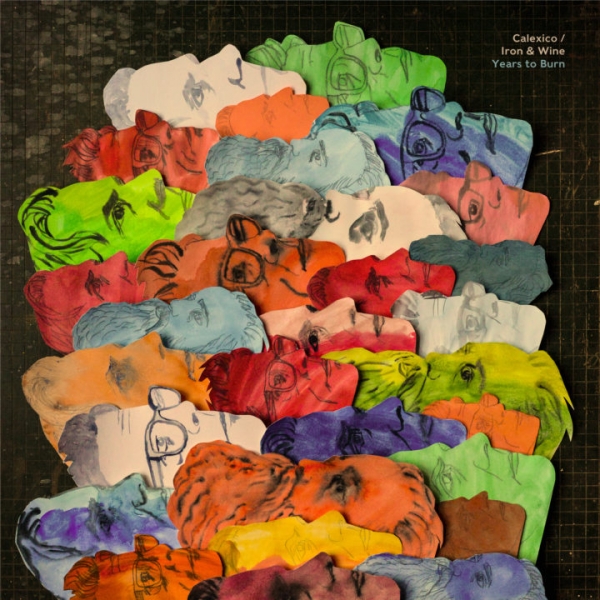 Apparently Iron & Wine and Calexico intended a brisk follow-up to their 2005 collaborative EP In The Reins. Contrasting schedules and other pursuits have meant that it’s taken almost 15 years to regroup. Happily, Years To Burn - appropriately titled, considering the circumstances - proves well worth the wait.

In The Reins proved to be something of a transformation for both parties. For Tucson cult legends Calexico, it was a chance to wrap their wide-screen borderline twang around songs that matched the haunting mystery of their trumpet and pedal steel-laden, majestic sweep. Sam Beam (AKA the North Carolina-based songwriter operating as Iron & Wine) , meanwhile, used the EP to make a decisive break from his whispering back-porch balladeer persona, ditching a trademark near-solo acoustic style in favour of sprawling full band arrangements on subsequent dust-blown Americana masterpiece The Shepherd's Dog.

Whereas In The Reins was essentially Beam backed by Calexico, Years to Burn is a more thorough blend of both parties. Ever-prolific, Beam contributes most of the material, but vocal duties are shared equally with Calexico's Joey Burns. There's a winning off-the-cuff looseness to the proceedings. For all their other strengths, Beam's more recent offerings have suffered somewhat from overly mannered, at times excessively busy arrangements. For most of its brief, eight song duration, Years to Burn sounds very much like an authentic document of a band playing in a room.

For all the gathered manpower, the musicians know when it's time to scale things down. The startlingly beautiful title track - Beam's songwriting markedly affecting throughout here - is little more than a haunting, slow motion whisper. Best of all is the extended, multipart "The Bitter Suite", which starts off as a Tex-Mex lament, swerves into a cloud-touching offshoot of hippie harmonising ala Crosby, Stills, Nash & Young via contemporary revivers of such vibes (ala My Morning Jacket), and lands into Beam's most moving ballad of bruised lives (with Calexico's gently clickety-clacking accompaniment creating a perfect accompaniment to Beam's imagery of leaving trains) since the mid-'00s. Hopefully it won't take until 2035 for these two perfectly matched parties to team up in the studio again.