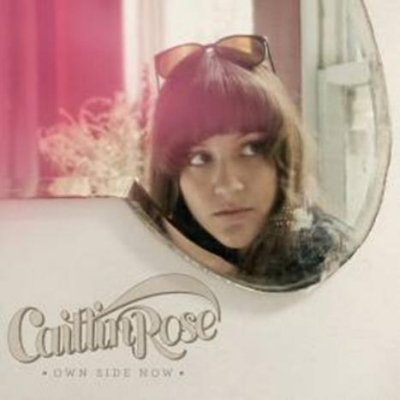 In a rush of enthusiasm, it’s all too easy to declare a new release ground-breaking, extraordinary and superior, like the musician in question has performed a death defying and physically impossible stunt in front of Evel Knievel, without even breaking a sweat. With any luck, that album will take pride of place in your record collection for the rest of the year; without any, in the next month it will lie discarded somewhere on the floor, collecting dust in favour of another; but every now and again a truly special album materialises, one that has the power to transcend time, space and a renewed interest in the charts. It will become that all important release you originally declared it to be. In my experience, this has happened only a few times – this August, and with a year of anticipation behind her, Caitlin Rose will get even with the score.

Own Side Now is wonderful. It is ground-breaking, extraordinary and superior; Caitlin has taken traditional country music and given it a modern and appealing edge – if this time next year the kids aren’t wearing snakeskin boots and chewing grass in the local park, I’ll print this review out and eat it. Rising above a preconceived hype, she‘s also written these songs with the grace and articulation of a very talented and wizened musician, yet this is her first full-length; ‘Things Change’ offers a healthy dose of sincerity, condolence and shipwreck, and its looming orchestral atmosphere and maturity is comparable to the material Laura Marling chose for her sophomore album I Speak Because I Can.

From a British perspective it seems Caitlin has caught the surf in terms of attention; that couldn’t be farther from the truth – having recorded her Dead Flowers EP way back in 2008, it took her two years to release it on Names Records in Europe, and all that time she was hiving away in the background: trashing, crushing and cramming this album into the format the summer of 2010 has presented to us. Consequently, several of the older songs have been rehashed and rerecorded into oblivion – they barely resemble their original selves; ‘Shanghai Cigarettes’ has a jaunt to its stride that was previously reserved for a slow step, and ‘New York City’ is refreshing and revived. Elsewhere, ‘For the Rabbits’ has been bolstered up with a handful of strings and a chorus that will make your heart sore (pun intended). There are precious few wholly new tracks, but of those ‘That’s Alright’ is a suitably casual cover of Fleetwood Mac and ‘Comin’ Up’ cements the album’s greatness. ‘Own Side’ and ‘Spare Me’ are sombre ballads that are at once defiant and distinguished.

Caitlin’s peers will be hard pushed to find a more worthy competitor; brimming with the passion, dexterity and drive it’s necessary to have to rule the roost for years, nay decades, I have no fear for Own Side Now’s sanctity. That is of course, unless my copy wears thin from being overplayed.