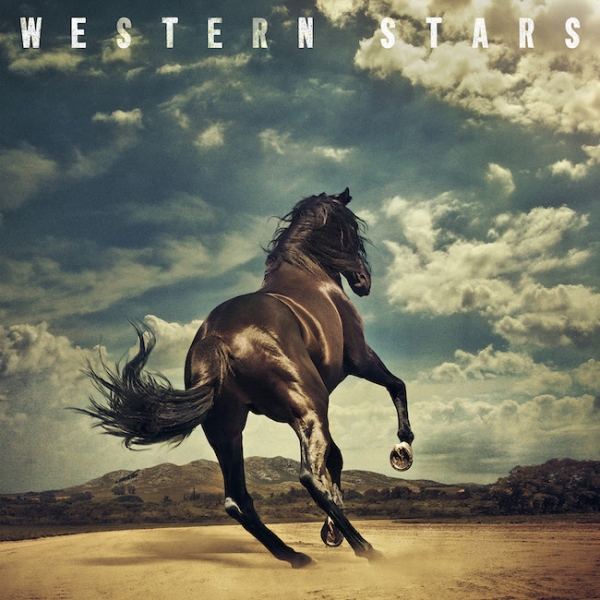 Triumphant though it was, spending over a year playing shows night after night at the same Broadway theatre was a very un-Bruce Springsteen thing to do.

As the numerous references across his back catalogue and his mammoth touring schedules have long attested, he is a restless fellow almost maniacally preoccupied with hitting the road. And while those same Broadway shows poked fun at the inauthenticity of singing so often of a nine to five drudgery he knows nothing about, the road is something of which few songwriters have more experience.

While far from autobiographical, Western Stars is covered in that conceptual tarmac, and Bruce details its every turn with unwavering authority. Largely, the characters on his first solo record in fourteen years are either behind the wheel searching for something (love, a home, the nearest Little Chef), or running from the same. From the washed-up actor of the superb title track - once appearing in a shootout with John Wayne but now reduced to selling Viagra on infomercials - to the crippled thrill seeker of “Drive Fast, Fall Hard (The Stuntman)”, these are some of the most vivid portraits he has ever penned, often fleshing out an entire backstory in the space of a single line. While these are not lives he has lived, they are ones he brings to life.

Is it any good? Well, while not the equal of anything in his imperial phase (come on pal), it’s certainly superior to everything since 2007’s underrated Magic. The classic California country hits of the 1960s have proved fertile ground for inspiration, and the string and vocal arrangements - the latter courtesy of wife and bandmate Patti Scialfa - are a consistent joy. It’s largely good-to-great, with some truly sublime moments (the aforementioned “Western Stars”, “Hello Sunshine”’s elegant “Everybody’s Talking” homage) and just the one true duffer (“Sleepy Joe’s Cafe” is a little too close to The Mavericks’ “Dance the Night Away” for my liking, though I’m certain it will be some fans’ favourite song here for similar reasons).

It is sentimental, prone to cliche and utterly, almost defiantly devoid of any current musical relevance. But Bruce Springsteen has earned the right to journey on unconcerned with any of those things, and is one of the few songwriters who could deliver a record like this with any kind of conviction. Western Stars is simply a classy record from a man growing increasingly comfortable with his status as an elder statesman of classic rock. And I absolutely cannot wait to listen to it in a car.