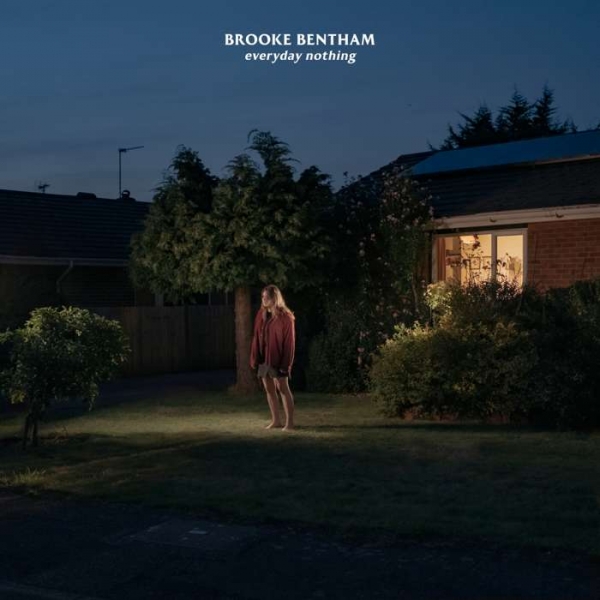 Brooke Bentham’s debut is an unwavering, unapologetic proclamation of existentialism, societal criticism, and appreciation for the mundane.

Navigating your early twenties inevitably brings one face to face with some form of existential crisis. For Brooke Bentham, the perfect way to cope with uncertainty of the future and the anxiety of simply being alive was to simply document the little moments that we often overlook. The 24-year-old draws influence from Yo La Tengo’s ‘90s alt-rock sound, Bon Iver’s echoing ballads, and Angel Olsen’s lo-fi songcraft. She has opened for both Sam Fender and Nashville-based Soccer Mommy (who she has often been compared to). What sets her apart is her brutally honest lyricism, captivating melodies, and strikingly simple instrumentals.

The album opens with “With Love,” an intro of soft guitar static that grows into a subtle pulsing bassline and the occasional soft tap of a cymbal. According to Bentham, as soon as she started making the song, she knew it would be the start of the record, even though it was one of the last that she wrote. While the chorus reflects upon messing up a relationship, Bentham reveals that she was “doing absolutely dandy at the time,” and that it wasn’t describing her current situation at that point. The truths of the song are uncovered in small snapshots of life’s little moments, from walking in the streets at night to taking a bath with a candle. If you close your eyes and breathe slow, you can picture yourself in either of those places as Bentham’s relaxed, low whispers guide you through the meditation.

Bentham picks up the pace with “Perform For You,” a tale about a toxic relationship from the perspective of a character in a book she read called Promising Young Women. “It’s a total trash rom-com book, I read a lot of those to be honest,” Bentham admits. She has a way of putting herself in the character’s shoes, and she sings her conditions to her imaginary lover, “treat me like a helpless toy and I’ll perform for you.” Bentham brings the story to life, and the anguish in her voice is palpable.

“High” delivers a smooth, jazzy, ballad that professes Bentham’s nostalgia for a better time. “Blue Light,” paints a picture of small moments of a relationship. She sings “you brush your teeth more than me, I feel so ashamed.” “Without” is a love song that Bentham wrote for her boyfriend. She shares intimate details of having her neck kissed in the nighttime, but also of her fears for the future, and hopes that they’ll make it. One of Bentham’s personal favorites is “Telling Lies,” and gentle and minimal guitar song.

Bentham highlights her complicated relationship with music and “falling in and out again,” in “Keep It Near.” She wrote it at a difficult point in her life where she had just finished studying popular music at Goldsmiths University and had too much time on her hands. Without structure, she lost motivation and fell into a vicious cycle of procrastination. She surrenders herself to her pursuit of music as she sings “I left my mouth to become yours.”

“Men I Don’t Know” also documents Bentham’s love-hate relationship with the music industry. She tells of standing in a room full of men she doesn’t know and feeling the magic of music slip away as she comes to realize that music isn’t just her and her art; it’s a business.

“All My Friends Are Drunk” was written on a Sunday evening about how Sundays are just “nothing days.” Bentham explains, “you don’t really have to pay attention to yourself and then it kind of just descends into this stream of consciousness where I just got really anxious about the fact that we’re alive and we have to be alive every single day.” Bentham’s existentialism isn’t merely a panic, but an eloquent reflection on the human condition. She sings the overarching question “How does anybody do this?”

A brooding bassline opens “Control,” a reflection on someone Bentham used to know who completely stopped talking to her out of the blue. She asks when she sings, “tell me what is it about me you really hate, was it something I did to piss you off somehow?” Layered harmonies over the chorus create the illusion of the overwhelming feeling of not being about to get that person who ghosted you out of your mind. “I think especially with the age of the internet it’s so easy to get caught up on people who follow you, people you don’t follow you, and all of that sort of stuff that really gets into your brain,” explains Bentham.

Everyday Nothing concludes with the first song Bentham wrote for the album, “Baby Lungs.” The song was born on a voice memo in a time where she wasn’t writing much. She set a goal to just write what she was feeling. She describes the small details of her every day, but also candidly shares an intimate snapshot of her mind with the line “I don’t smoke, ‘cause I dont wanna die anymore.” The melody winds lazily along in a Velvet Underground-esque fashion that perfectly suits Bentham’s vocal and the story she tells.

The collective story of Everyday Nothing is not entirely autobiographical, yet Bentham’s words are convincing enough to make it feel entirely true. “There’s my own personal stuff weaved into it, but I tend not to make all of my songs completely about me,” says Bentham. Her stories are made believable by the authenticity of Bentham’s real-life everyday nothings that season each song and open our minds and hearts to the most primal feelings we encounter and the most insignificant events that take place in our lives.