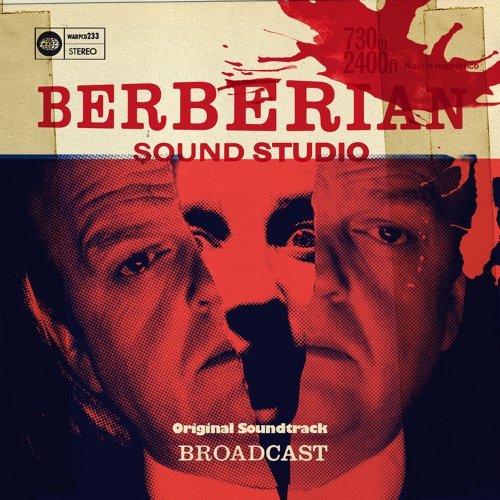 Most film soundtracks, scores included, stand up as a perfectly listenable albums in their own right. Broadcast’s contribution to the Peter Strickland film Berberian Sound Studio functions more as a museum of grotesque curiosities, as befits the corresponding thematic content.

The film, set in an Italian horror film studio during the ’70s, can be most appropriately described as a meta-horror, in that it blurs the line between fiction and a horrible reality. The sad fate of Broadcast singer Trish Keenan – who died sometime between the recording of the soundtrack and the film’s release – inescapably lends itself to the mysticism of the plot.

Broadcast were the perfect band to recruit for a score harkening back to a classic era of vintage cinema, their sound heavily retro-fitted with wax cylinder vocals, warped atmospherics, and acid-corroded organs/keyboards. They are the next best option to sifting through back catalogues of period music, or rousing an old film composer out of retirement for a quick throwback. Broadcast thrive here, in their unique ability to render audio through an Instagram filter.

The soundtrack contains 39 individual tracks, most of which are under a minute in length. They are a multifarious bunch, some standing alone as isolated cinematic excerpts, others unified through recurring threads and common conceits. ‘The Serpent’s Semen’ is all of eight seconds long, a multi-tracked wall of piercing shrieks. Another track, ‘A Goblin; (0:35), evokes the creature mentioned by title, as we hear a guttural, gurgling sort of vocal drone followed suddenly by rabid, convulsive utterances in what sounds like tongues. There are a few more sound samples of this variety – which appear to come straight off the soundboard of this film-within-a-film – as well as little musical interludes that aren’t so much full-length songs as brief moments of musicality, like ‘Collatina’s Folly’ which is 48 seconds of sombre, reverb-drenched piano arpeggios and keyboard notes. The tone is frequently minimal and barren, full of church organs and flutes, downcast as a movie plagued by tragedy should be; note the distinctly gothic-sounding, Phantom of the Opera-evoking ‘It Must’ve Been the Magpies’, the title of which piques the imagination only slightly more than does the music contained within.

The most exciting aspect of Broadcast producing a film score is seeing a band defined by a proclivity for pop structure put its name where a white-haired eccentric or a classically-trained orchestral ensemble might traditionally put theirs. On Berberian Sound Studio, we hear a band escaping the imprisoning clutches of conventional structure and embracing full-on, barrier-tripping avant-garde (listen to ‘The Sacred Marriage’, for example, and you hear undulating electronic emissions elope with frenetic jazz drumming and over-saturated glockenspiel chimes).

There are two tracks, notable outliers, which last longer than three minutes, but still can’t really be called “songs” in the traditional sense. One of the two (‘Teresa, Lark of Ascension’) contains audible vocals of the kind that are elsewhere either drowned out by effects or non-existent, and is terribly pretty for a piece of music resting beside indomitable demons and sonic exorcisms. It’s a shame that the music doesn’t come in larger chunks, as some of the melodies are born and killed off before we hardly even get a chance to known them.

What’s left is a truly beautiful, if slightly dishevelled, gothic menagerie, amongst the last of an intact Broadcast’s recorded works, and a great inducement to see this movie so apparently rich in sound, terror, and beauty.