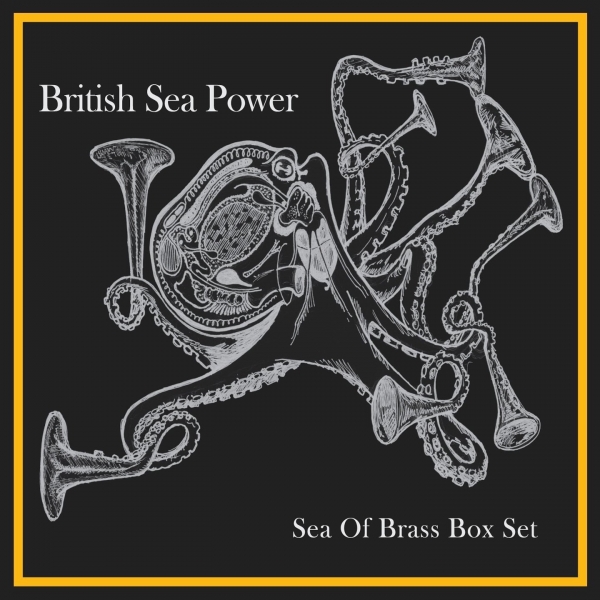 No matter what you think of their music, you have to admire British Sea Power’s ambition.

They are unafraid to stick out their collective neck in pursuit of a furthering of their particular sound, nor are they fazed by applying that sound to use in other media – their 2009 soundtrack to the 1934 ethnofiction film Man of Aran is a prime example of their esoteric approach to composing and releasing their music.

In some ways Sea of Brass has more in common with Man of Aran than with any of their other studio records, by virtue of its roots in experimentation and collaboration. The record consists of assorted songs from across their 15-year career, rearranged and set against a dramatic backdrop of enormous, dense brass instrumentation. As an idea, it sort-of-nearly makes sense – after all, BSP are the closest the UK has to an Arcade Fire equivalent, such is the idealistic, widescreen nature of their distinctive brand of indie rock, and as the Canadian band are bolstered by their own extensive orchestral arrangements, maybe so too can these plucky Cumbrians.

In practice, and in a similarly convoluted way, it nearly works – but, unfortunately, not quite.

Firstly, let it be said that there are no problems with the songs on offer here. Each of the eight tracks on the release’s main disc (one of three CDs in the deluxe package, which also includes a live DVD) exists in a splendid form elsewhere in the band’s back catalogue. And please do not assume, therefore, that the addition of the brass arrangements are instantly and unanimously ruinous – the brass often provides an interesting counterpoint to BSP’s motorik rhythms and knife-edge guitars.

The problem lies in the moments, of which there are far too many, in which the brass simply sounds unnecessary. The billowing, thunderous rasps that clamour atop the climax of “Atom”, for example, are satisfyingly melodramatic and OTT, but they just don’t need to be there. The song is more than exhilarating enough, a fact that quickly renders the extra instrumentation more or less redundant.

Listening and watching through the four discs, one might be tempted to dismiss a release like this as mere self-indulgence, a proggy, too-long decadence of a kind that should have died out long ago. That, however, would be inaccurate. British Sea Power are just not that kind of band. The unwieldy length and saturated arrangements of Sea of Brass are not a product of ego; it owes its existence to the band’s aforementioned eclecticism and ambition. It can be heard in Jan Wilkinson’s worldly-yet-ingenuous vocal, seen on the live DVD in the band’s wide-eyed, impassioned stage presence. This is a band delighting in the opportunity to manipulate and expand their songs in previously impossible ways, and it is their earnestness that carries them through a sometimes-dragging collection.

There are undeniable moments of beauty (the radar-bleeping beginning of “A Light Above Descending” is lent a lovely, watercolour quality by its gentle horn accompaniment), and the live cuts tend to fare better than the studio recordings, imbued as they are with a tangibly excitability. It’s irrefutable though – much of Sea of Brass (by which I mean both the studio album itself and its associated extras) does feel bloated. As I said at the beginning of this article, British Sea Power’s lack of inhibition is admirable, and this is not tainted by the excesses of this experiment. Maybe next time they will find an area into which to expand that will prove a little more sonically fertile than the unfocussed brass on show here.