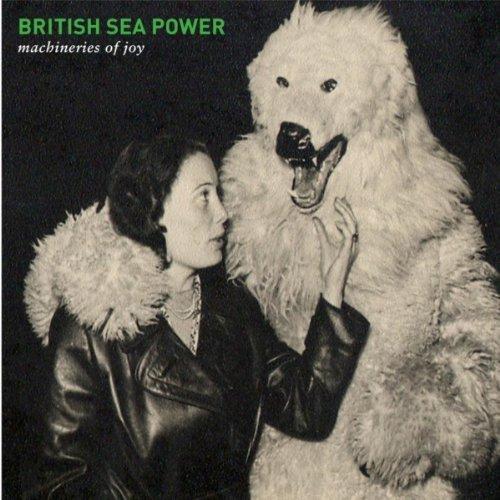 There’s clearly a method in all their madness. Even British Sea Power’s most ardent fans have to admit 2011′s Valhalla Dancehall was a bit of a stretch. There was still plenty to admire, of course: songs with characteristically anthemic hooks like ‘Who’s In Control’ and ‘Mongk II’, the celebration of quaint Englishness contained in ‘Georgie Ray’ (dedicated to writers George Orwell and Ray Bradbury), among all the usual high jinx and bonhomie.

It just seemed to stretch out for miles, like the Isle of Skye where it was recorded, an hour long plus a bonus EP, and all preceded by the intro Zeus Maxi CD. No doubt the fruits of some lengthy sessions, but singer Yan commented recently you could get lost in the whole thing (and he didn’t mean that in a good way).

By contrast, Machineries Of Joy is just 40 minutes long, tracks honed from the 6 eponymous EPs the band released in the first 6 months of last year, as they played their Krankenhaus Klubnachts at Brighton pub The Haunt. Although the songs were written up in the Berwyn Mountains of North Wales, they were rehearsed intensively during the city residency and finally recorded in just 2 weeks. The selections for the album are about as lean as the cyclist in their video for the title track, another tribute to Ray Bradbury, with its Krautrock motorik sound being pared down to around 6 minutes.

Songs like ‘K-Hole’ and ‘Monsters Of Sunderland’ still reveal British Sea Power in anarchic mood. Phil Sumner’s cornet intro for the latter barely disguises the power-chord madness which ensues, and on the former Yan yells into a drug-induced abyss caused by the horse tranquilizer ketamine, guitars threatening like the singer to spiral out of control. Some things will never change.

They also show off a quieter side, driven by Abi Fry’s viola playing. Is ‘Hail Holy Queen’ an homage to a French female body-builder-turned-erotic movie star? You’d certainly imagine so from Hamilton’s mysterious falsetto lyrics (“I’m at your feet/I’m at your command/Hail Holy Queen of the scene”), but it’s the meandering bow style, something like the Velvet’s classic ‘Venus In Furs‘ or Beth Orton’s ‘She Cries Your Name’, which really makes the song. ‘A Light Above Descending’ is slower and more atmospheric, psychedelic and chamber pop, pastoral like a Vaughan Williams symphony, with lyrics about chastity and Franciscan monks, while album closer ‘When A Warm Wind Blows Through The Grass’ is dark and haunting, like the acid folk of Susan Christie’s ‘Rainy Day‘ or Greg Weeks and Espers’ albums.

Fans will be reassured that British Sea Power still find inspiration in the strangest of places. On ‘What You Need The Most’, Yan sings a eulogy to a pyrex dish whose finest moment was when it cracked, declaring mysteriously that “What you need the most is your own love”. Is pyrex a metaphor for betrayal? There’s also a tribute to Joe Meek‘s writing partner Geoff Goddard in ‘Radio Goddard’, and, as if to show what they mean, ‘Spring Has Sprung’ is full of birdsong and other odd sounds of the current season.

‘Loving Animals’ brings together all the best elements of the band’s canon in the album’s true standout. Yan may not have got over his horse tranquilizer trip, as the song starts off menacingly describing a hunt of these noble creatures. It then breaks off into a calming chorus, followed by more dissociative anesthesia and finally … a celestial choir – of course! It’s beautifully staged and reminds me of the singing at the end of Lou Reed’s ‘The Bed‘ from the classic 1973 album Berlin.

So a choir of angels crowns Machineries Of Joy, another reminder that alongside the pop hooks and power chords, British Sea Power can still wrong-foot and charm in equal measure. They don’t give rock groups a manual, but if they did this lot would have torn it up and written their own. It was a curious decision to name their debut in 2003 The Decline Of British Sea Power, but it all makes perfect sense when you read Roy Wilkinson’s 2011 biography ‘Do It For Your Mum‘. The older brother presents a warts’n’all picture as the band emerge in the last decade amidst the curious relationship Yan and Hamilton shared with their octogenarian father Ronald who grew to love their music.

Learning the lessons of its predecessor, then, album number 5 is an intelligent distillation of everything that people cherish about British Sea Power and what makes them a truly Great British rock band. They were never going to be conventional in the rock’n’roll sense of the word, but mad? Seriously…