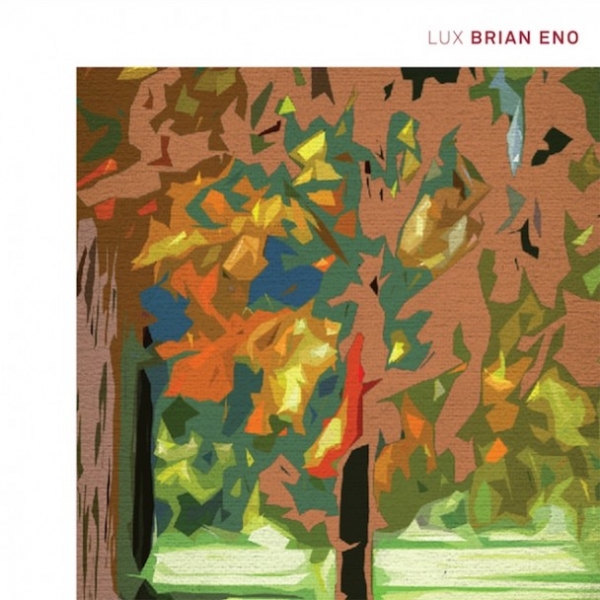 When Brian Eno signed to Warp Records, an album like Lux seemed like an inevitability yet after a remarkably prolific run of albums, it’s taken him three years to get here, with a classic-sounding ambient Eno record.

For a man who doesn’t like to look back, there are a fair few signs pointing towards the past; that paint-by-numbers cover smacks of Another Green World, while Eno has obviously done the extended ambient moodpiece before, on the likes of album-length tracks like Thursday Afternoon and Neroli. So what makes Lux different from those records, aside from being Eno’s first totally solo (ie: nominally non-collaborative) release since 2004′s return-to-singing Another Day on Earth? Well, to tell you the truth: nothing.

The four movements of Lux do not have the track-by-track definition of, say, Music for Airports – on which each piece (methodically named for its position on the LP) was blessed with its own instrumental characteristics. The pieces that make up Lux, rather, are all built on the same foundation – of pianos playing single notes, graceful clusters of strings, and occasional, unplaceable chimes and drones. The production, however, is beautiful; the mix of acoustic instrumentation (a couple of string instruments and Leo Abrahams on “Moog guitar”) and electronic textures shows Eno sounding extremely comfortable on his own turf. As with his other records under the unofficial “Music for Thinking” banner, there’s no post-rock style sturm und drang to be found here – this is very much a drifting album. Sounds retreat as soon as they’ve bubbled up in the mix. Motifs – or more aptly, collections of two or three notes – are repeated by different instruments for seemingly endless periods of time; occasionally, sounds come into focus, and chords slowly take shape, glacially eliciting emotion in slow motion.

I’ve listened to the album a few times; occasionally on its own terms – on speakers, whilst sitting on a beanbag with a coffee or a beer – but mostly (as his ambient works are intended) as I’ve been doing other things. I’ve listened whilst doing housework or wandering to work, letting real life sounds bleed into my ears over the quietude that floats through my headphones. As with every ambient Eno album, this is functional music, wallpaper music. It’s hard to get passionate about – you won’t have a compulsive urge to reach for this record over any others of its kind – and it’s damn near impossible to consider in the same terms as any other record. Sticking a numerical rating on it, in particular, is a futile pursuit, albeit one I’m somewhat forced into doing. Yet, Eno has been making music like this for so long that you can’t be expected argue with it, and it would be foolish to try. Lux is the sound of a man who knows precisely what he’s doing, even if the structure and notation of the music he makes seems to be generated at random. There’s a heart to it, certainly, but it’s a tricky organ to get a handle on.

I adore the work of Brian Eno; the four early albums that constitute his tetralogy of self-described “idiot music” remain some of my personal favourites (especially Here Come the Warm Jets). Yet, I’m not closed-minded enough to be crying out for him to start “writing proper songs again” or some other such nonsense. There’s just so little that can be taken from writing about an album like this; Lux is less an album to review, and more like the springboard for pieces such as this, where reviewers write about writing about Lux. I mean, what’s to say? You know what you’re getting when you pick up an ambient Eno record, right? No one in their right mind would buy Lux expecting to hear ‘Baby’s on Fire’ MK 2. This is an album that was composed simply to be there. This review, similarly, is written to fill a Lux-shaped space on this website. People will listen to the album, (far fewer) people will read this article. But both are there for functional use and, in the case of Lux, that’s why it’s so appealing. You can’t get sick of music like this because there’s so little to get sick of. But, likewise, you can’t exactly fall in love with it either.