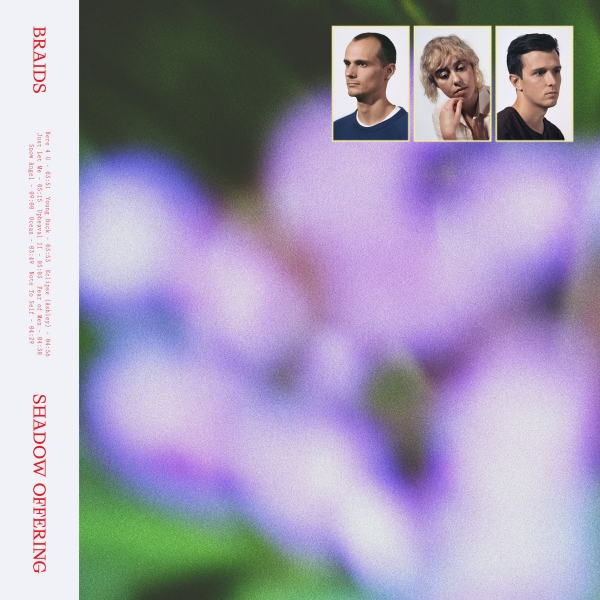 Braids have refined themselves, ready to offer mature, emotional soundscapes of understanding.

Now on their fourth outing, opening track “Here 4 U,” focuses on the bold vocals of lead singer Raphaelle Standell-Preston as she surrounds herself with the cinematic bursts of repetitive synths, broken by piano and guitar to showcase an expansive sound. Following track, “Young Buck” with melancholic vocals offset perfectly by upbeat percussions and faded riffs, is a sinful love that journeys through the nervous anticipation of desire, the playful chase of seduction, the rocky roads of obsession and all the humour in between.

The nine-track production is cohesive both in terms of sonic arrangement and messaging; where the piano and string sections hold in strong constancy, the overarching message of love and its complexities is rooted in the lyrics. But it’s neither the soundscape nor the imagery it invokes that shines on Shadow Offering, instead it's Standell-Preston’s confident, theatrical vocals which take centre stage. Effortlessly climbing into high registers and fearlessly swooping down, they're particularly evident on tracks such as “Eclipse (Ashley)” and “Oceans.” While the latter track invokes a hazy, dreamlike sensation with harmonic vocals and soft guitars, the former is stunningly vibrant and cheerful in contrast.

While slow-build tracks like “Just Let Me” - which talk of the unnoticed distance between people - blend heavy bass synths with the sweet melodic ringing of guitar riffs, other tracks like “Upheaval ii” with hard guitar arrangement and light touches of the keyboard celebrates soft rock elements and the sly and sleek melody of “Fear Of Men” comes with the message that love requires work. With seamless transitions, the album is body of work with diversity at its best play.

The sonically diverse collection that Braids have put out into the world is further enhanced by an enchanting honesty, particularly on the highlight of the record “Snow Angel” where the trio walks us through the current issues faced by the world such as over-population, global warming, pollution and most accurately and timely, racism; as Standell-Preston uses her lyrical gift to recognize her own privilege as a white woman. A progressive, powerful track with hard, heavy sonics that speaks of the seriousness of the message, “Snow Angel” deserves many listens to hear, understand, and deconstruct the words that echo in our ears to bring forth an impactful change. Artfully balancing the heaviness of “Snow Angel”, the album ends with the catchy, energetic stylings of “Note To Self”

A luscious, intricate body of work, Shadow Offering recounts pain, heartbreak, anger, and everything else that nestles in the heart of humanity before lifting the trodden towards the light of hope. With this album Braids build a world of honesty and melancholia, gently settled by a relaxing soundscape that surrounds listeners in a sleepy sense of calm to remind everyone that perhaps everything will be okay as long as love remains with us in some form