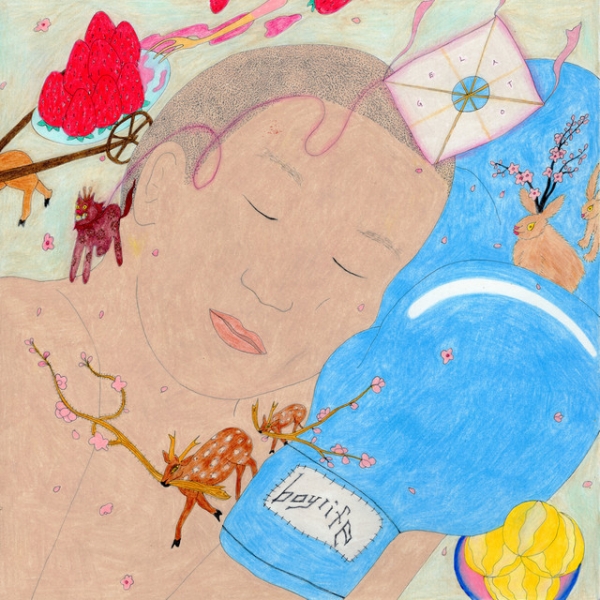 Ryan Yoo - AKA boylife - makes music for the in between moments of love; not the searing highs and lows of the many ‘firsts’ that come along with a relationship, but instead the well-earned comfort of deep, long-term love; proving, in the process, that familiarity is not synonymous with monotony. Weaving together character-driven narratives with tales from his own life, Yoo’s music captures what it’s like to be so accustomed to someone that their absence makes life feel unlivable (“When you leave me, you leave me hollow”).

With love of this depth, there’s an inherent, pervasive fear of what would happen if it were to disappear, but there’s also an irreplicable joy that stems from it; a joy that Yoo proves himself to be an unrivaled master of conveying. Over smooth and timeless R&B arrangements, he evokes hyper-specific memories (“You were kicking up sand clouds, holding your heels / Haven’t ran like that since God knows when”) to capture love’s essence; making it seem less like a fleeting state and more like a superpower.

At times, it’s easy to get lost in the sensual R&B of tracks like “Peas” and “Hey”, but Yoo always know how and when to firmly pull listeners attention back. “Church” is a disarming and disturbing number, featuring nightmarish, distorted backing vocals that evokes Injury Reserve’s recent By The Time I Get to Phoenix and startling lyrics that speak to disillusionment with organised religion and much of American culture at large (“Don’t make me go back to church / Don’t make me swallow no stars”).

Elsewhere, Yoo grabs listeners attention with evocative and explicit lines: “I’ll come inside of you / The sound of you moaning / In the heat of the moment”. Sung with utter conviction and authenticity by Yoo, the shock value of such lines never takes away from the dreaminess and wide-eyed outlook throughout. This ultimately speaks to gelato’s most alluring and enduring strength; it’s ability to seamlessly combine so many seemingly contrasting ideas together; whether it be the album’s mixture of endearing innocence with frank sexual exploration, or the combination of experimental rap with pop-infused R&B that somehow works effortlessly together.

Gelato, at its core, is an album about joy. But just like Michelle Zauner (of Japanese Breakfast) did on the joy-centred Jubilee, Yoo understands that you can’t fully experience and understand joy without knowing it’s opposite. Yoo’s debut as boylife is a loose concept album of sorts, tracing the journey of a relationship from it’s strongest and most loved up moments, to its ultimate demise. The staggering intimacy with which Yoo paints the relationship in it’s most intimate and codependent moments (“I’m like clay in your hands / I’ll melt away in your hands”, he croons at one particularly affecting point) make the inevitable fallout all the more heart-breaking; there’s a breath-taking bittersweetness to confessions like “you still mean something to me”.

Admittedly, gelato still falls prey to many of the faults that most debuts do; the more straightforwardly hip-hop moments veer dangerously close to sounding like a BROCKHAMPTON pastiche and, as he’d surely be the first to admit, Yoo’s rap abilities aren’t yet at the levels of many of his peers. Still, it’s impossible to listen to gelato without being taken aback by the sheer ambition, no-holds-barred vulnerability and versatility of Yoo’s debut. A sign of great things to come.