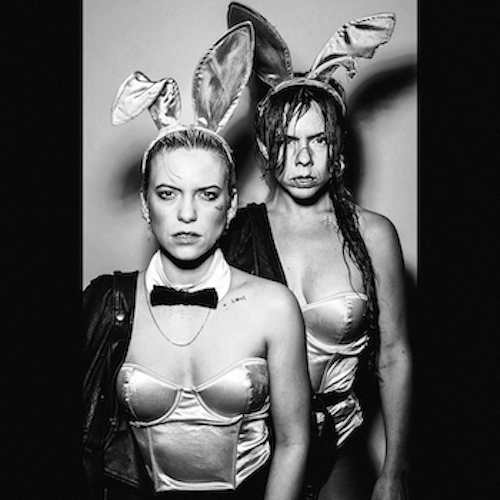 In this time of political turmoil and social unrest that basically feels like we’re living in our own episode of Black Mirror, music is one of the only sources where we can truly express our disdain for ‘The Man’. Russia has Pussy Riot, America has Fever 333. We Brits are in desperate need of an in-yer-face anti-political rock outfit; having women leading the charge would be nice. Enter Bones UK.

Here, on their self-titled debut record, the two hold no bounds while giving us a perfect slice of who they are as an outfit. Pulsing beats, urban grit and a true underground feel define the theme of the record. The opener, "Beautiful is Boring" exemplifies the band’s penchant to write lyrics rebellious in nature. It’s here we see how the duality of the two vocals works well together. The “loud and proud” attitude continues into songs like "Filthy Freaks" and its owning of femininity and sexuality. While the tracklist is strikingly consistent, it’s at this point the album leaves you wanting more. Tracks like "Skeletones" and "Pretty Waste" start to feel somewhat one-dimensional once you hit the one minute mark.

To its credit however, these moments are balanced out when "Creature", with its central power chords and straight-up rock approach. We get to delve into other themes as there’s some semblance of a break-up song on "Leach". While on paper, that sounds more like an attribute of a “pop” band (whatever that means these days), the reliability of heartbreak gives the album - and in turn Bones UK - much more depth. The band’s diversity jumps out further when they explore more sultry more pop sound on "Souls", giving it the feel of an epic ballad. It would be near perfect, if not for the mixing of the warped electronics and vocals feeling a tad muddy and distracting.

There’s no escaping the fact that this album is basically a giant ‘Fuck You’ to the establishment and to its stereotypes. There is an essence to Bones UK that’s hard to put your finger on, that pulls in your intrigue. But whatever you make of this unapologetic project, their soaring riffs and electrifying vibe show they have the ingredients to set the world alight in a big way.