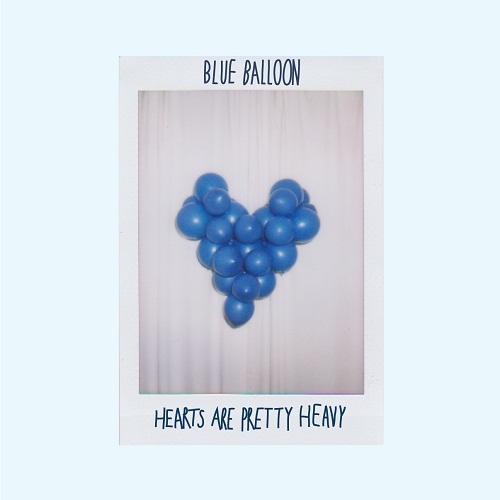 The symbolism of singer/songwriter Robert Rorison’s chosen nom de plume – naturally buoyant but coloured by gloom, perhaps tied down by somebody’s string – provides a thoroughly appropriate motif for debut album Hearts are Pretty Heavy. On first impression, Blue Balloon seems one to consign not just to the sorrow of a lost love but also to the wayside of subdued balladeers. With little idiosyncrasy, this considered collection of touching tracks is tuneful but unremarkable, an absorbing proposition but hardly unusual. First impressions, however, are fallible, and the strong streak of heartbreak notwithstanding, this eight song set is more adeptly hewn than your typical pine-and-whine exercise.

Rorison has toured with Stornoway and First Aid Kit, and this collection fits comfortably within those parameters; tender, sincere and acute. Appropriately lacking someone to harmonise with, he sometimes double-tracks his voice. Rorison’s vocal dexterity is impressive and his lyrics are, at times, endearingly self-deprecating: “I know my song is stupid but my aim is almost true” he sings on ‘Firstsong’, elsewhere admitting a fondness for cliché. Rorison has described “lyric shaped holes in the world I feel like I can fill”, and this approach is apparent – it is lyrical snippets and snatches, semi-Sapphic fragments, which stand out and sustain interest. Cod proverbs (“a crown hangs a little more heavy on the head of a queen”) and pithy romanticisms (“every awkward glance, stolen kiss or stumbled dance”) are cast in a wry idiom of piqued self-knowledge (“blame can be apportioned when we put back on our clothes”).

The entertainingly-titled opening track ‘Talent Show Catastrophe Blues’ is a song of two halves, the first deliberate and vulnerable, the second given over to Rorison’s guitar and a sunny refrain. Lonely and lovelorn from the forlorn first line (“Perhaps the winds of change will blow me in your direction”), everything that follows is shadowed by the theme, including the jauntier ‘Ode to the Big Smoke’ (“my heart’s on the other side of that river”) and ‘Led Balloon’. This pun alludes to an earlier, self-referencing line, “my compass is a string hanging from a blue balloon”, and provides a brighter beat. Blue Balloon balances the ever-present ache with a wonderfully well-ventilated sound. A sanguine breeze often wafts but ‘Lastsong’ is notably faltering and subdued, a tender ending but a frustrating one too, because the album might have wanted an epiphany more than the closing of a circle: the turning of a corner, not the turning of a wheel. Confessional songwriters cannot be expected to manufacture recovery – but the listener is denied closure here as well.

In “fractured lullabies and fragments of song”, Blue Balloon finds delicate and potent ways to express regret at the passing of a relationship. It never feels indulgent, not least because, at a little over half an hour, there just isn’t time. These songs are a long way from the north face of self-analysis – Rorison has one ear squarely fixed on a pleasing melody – and, despite the distress, Hearts are Pretty Heavy is an undemanding listen. ‘Beijing Bricks’ is much indebted to the Squeeze song ‘Labelled with Love’ and other influences resonate too. As a declaration of conviction, the album’s title sounds an unfortunately moderate phrase. In fact, it is a dignified understatement for an attractive album of agonised idolisation, winning both sympathy and fond regard.