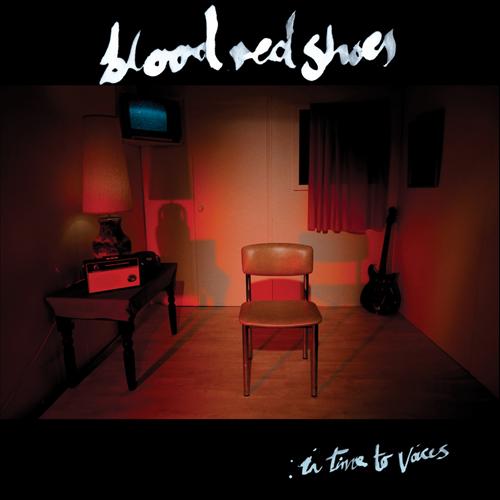 Since they arrived in earnest with 2008′s Box of Secrets, Brighton pair Blood Red Shoes have always been a cut above the average rock duo. The intervening years have seen them become a formidable live force tried and tested by a hectic touring schedule, but this year the band have returned to the studio – specifically The Motor Museum in Liverpool with long-time producer Mike Crossey – to record the traditional “ambitious third album”. Of the results, guitarist Laura-Mary Carter has been quoted as saying the Shoes “feel like a totally different band now”. Oh, that ominous phrase…

Although the intention was to take more advantage of studio possibilities and to be less shackled by the restrictions of live shows, In Time to Voices has left Blood Red Shoes not only sounding very different but also almost in conflict with their past selves. The instrumental pyrotechnics and familiar voices of Carter and drummer Steven Ansell are still present and correct, but the pair seem to have become wrapped up in the trappings of their dark, ambitious project to the extent that melodies fall flat, filler creeps in and the whole affair too often feels frustratingly out of gear.

Further evidence that the record was a little over-thought comes from the way in which the songs seem to conform so neatly to their specified niches, as if each was once a bullet point in a design document – the title track and ‘Cold’ were clearly written as singles, for example, with ’7 Years’ as the slow-building closer. In the middle of album, the 90-second thrash ‘Je Me Perds’ – a hopefully therapeutic account of Ansell’s mugging by a pair of prostitutes in Prague – is both a concession to the punkier sound of earlier records and an apology for the plodding acoustic number ‘Night Light’.

There are definitely indications that Blood Red Shoes have moved themselves on with In Time to Voices. The production is a significant step forward, and the instrumental palette has been successfully broadened while still remaining apparently bass-free. What is unfortunate, however, is that these advancements seem to have come at the expense of the songs, which too often either endlessly repeat a few phrases bonded to a questionable melody (in the case of the apparent singles) or plod aimlessly along a fairly esoteric song structure (in the case of many album tracks). With a few exceptions the instrumental fire and fury still remains, but rarely is it channelled in any kind of constructive direction. Flashy and new all this may seem at first, but the record offers little in the way of rewards for repeat listening.

For many bands, the quest to broaden a sound without compromising it is a familiar challenge particularly associated with third LPs. But stronger outfits than Blood Red Shoes have stumbled at this hurdle, and weaker ones have recovered, all the stronger for it. If Carter and Ansell go back to the drawing board with this ambition and combine it with the focus that brought them this far, then they have it in them to produce a real record to remember.